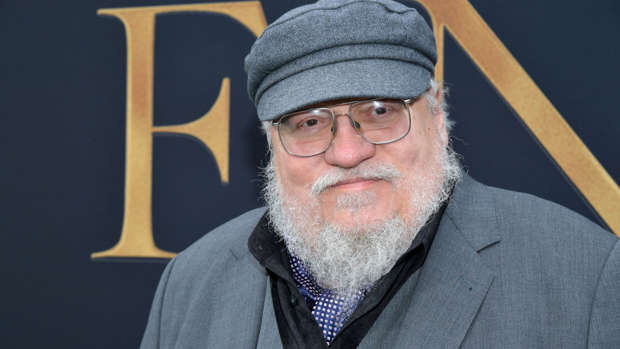 George R. R. Martin has blasted "absurd" rumours that he has finished the final two books in his 'Song of Ice and Fire' saga.

The 70-year-old novelist's fantasy novels are the inspiration for HBO series 'Game of Thrones' and fans have been eagerly awaiting the new instalments.

Martin has now rubbished comments made by Ian McElhinney - who played Ser Barristan Selmy in 'Game of Thrones' for five seasons - in which he suggested that the sixth and seventh books, titled 'The Winds of Winter' and 'A Dream of Spring', are actually ready but Martin was waiting for Season Eight to conclude before publishing them.

Martin has now stated in a post on his blog that the novels are not "finished" and he hasn't even begun writing the seventh book because he needs to complete 'The Winds of Winter' first.

He wrote: "All of a sudden this crazy story about my finishing THE WINDS OF WINTER and A DREAM OF SPRING years ago is popping up everywhere. No, I am not going to provide links. I don't want to reward purveyors of misinformation with hits.

"I will, however, say for the record - no, THE WINDS OF WINTER and A DREAM OF SPRING are not finished. DREAM is not even begun; I am not going to start writing volume seven until I finish volume six.

"It seems absurd to me that I need to state this. The world is round, the Earth revolves around the sun, water is wet ... do I need to say that too? It boggles me that anyone would believe this story, even for an instant. It makes not a whit of sense. Why would I sit for years on completed novels? Why would my publishers - not just here in the US, but all around the world - ever consent to this? (sic)"

The American novelist went on to assure fans of his tomes that he has not got a "deal" with HBO to withhold the books until the popular series has ended.

He added: "They make millions and millions of dollars every time a new Ice & Fire book comes out, as do I. Delaying makes no sense. Why would HBO want the books delayed? The books help create interest in the show, just as the show creates interest in the books.

"So ... no, the books are not done. HBO did not ask me to delay them. Nor did David & Dan. There is no 'deal' to hold back on the books. I assure you, HBO and David & Dan would both have been thrilled and delighted if THE WINDS OF WINTER had been delivered and published four or five years ago... and NO ONE would have been more delighted than me. (sic)"