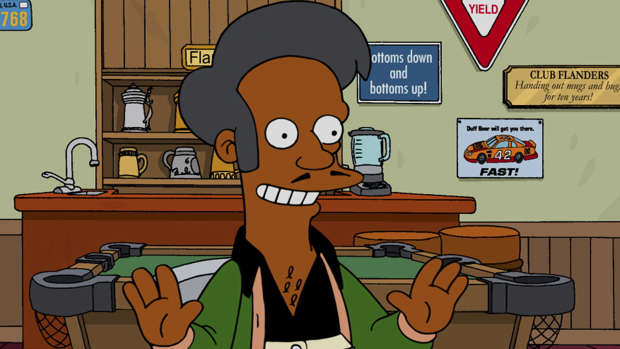 'The Simpsons' creator Matt Groening has defended the character Apu Nahasapeemapetilon from accusations he is a racist caricature and has vowed to still feature him in the animated series.

A debate was sparked about the depiction of the Indian-American Kwik-E-Mart owner by comedian Hari Kondabolu's 2017 documentary 'The Problem with Apu' - which featured commentary and opinion from Aziz Ansari, Whoopi Goldberg and Kal Penn among others - which discussed whether or not Apu had caused casual racism in the US and whether or not the fact that a white actor had voiced the Indian character was a form of brownface minstrelsy.

The documentary received a lot of support for tackling the apparent problems and Hank Azaria - the white Jewish actor who has voiced Apu since 1989 - spoke out to apologise if his portrayal had offended anyone and admitted he was "willing to step aside" from the part.

'The Simpsons' dealt with the debate in the story 'No Good Read Goes Unpunished', in which the makers broke the fourth-wall to reply to Apu's critics insisting he was a character that was created in 1990 before the advent of political correctness.

Now, Groening has spoken out about the controversy and is adamant he still loves Apu and believes that many of his critics have misunderstood the character.

"We're not sure exactly how it's going to play out. Back in the day, I named the character after the 'Apu Trilogy' by Satyajit Ray. I love Indian culture and Indian film and Indian music. I thought that the name was a signal that we had, at least, a scholarly intention. I thought maybe a kid was going to grow up and find out what the name came from and go watch the 'Apu Trilogy', which are the greatest films, basically, in the history of cinema."

Groening, 64, will not write Apu out of the show to appease critics and if the creative team can come up with suitable and funny stories for him and his family he will continue to be a part of the Springfield ensemble cast.

He added: "If we come up with a good story we'll do it, but some of the stuff the show got taken to task for, we covered in an episode a couple of years ago [in 2016's 'Much Apu About Something'] ... My guess is I agree, politically, with 99 per cent of the things that Hari Kondabolu believes. We just disagree on Apu. I love the character and I would hate for him to go away. I am sorry that 'The Simpsons' would be criticised for having an Indian character that, because of our extraordinary popularity - I expected other people to do it. I go, maybe he's a problem, but who's better? Who's a better Indian animated character in the last 30 years?

"As many people have pointed out, it's all stereotypes on our show. That's the nature of cartooning. And you try not to do reprehensible stereotypes."