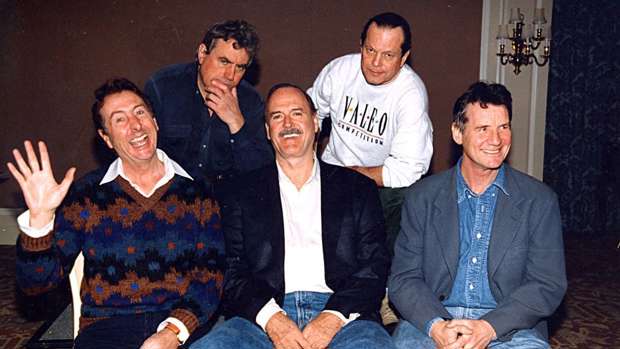 The celebrated comedy troupe, Monty Python - comprising John Cleese, Terry Gilliam, Eric Idle, Terry Jones, Michael Palin, and the late Graham Chapman - reach half a century of performance, sketches and shows in October and have a number of events planned to mark the occasion, including five new radio specials.

BBC Radio 4 will premiere the programmes in September and they will be executive produced by Michael and feature never-before-released material from the Monty Python sound archives. They will then be broadcast by US network Sirius XM.

The anniversary celebrations will start on September 1, when the BFI Southbank curate 'It's... Monty Python At 50', a month-long 'Monty Python' season, incorporating their roots, influences and subsequent work both as a group and individuals, and including all the troupe's feature films, oddities from the BFI National Archive, back-to-back screenings of every episode of 'Monty Python's Flying Circus' and TV shows and films including 'Fawlty Towers', 'Ripping Yarns', 'A Fish Called Wanda' and 'Wind in the Willows'

The season will also include a free exhibition and rare screenings of pre-'Python' shows such as 'Do Not Adjust Your Set'.

BBC Two will raid their archive to show defining career pieces, while BBC America will broadcast a marathon of 'Monty Python's Flying Circus' episodes, 'Monty Python's Life of Brian' and 'Monty Python and the Holy Grail'.

Network Distributing will release all 45 episodes of 'Monty Python's Flying Circus', on Blu-ray and DVD, fully restored for the first time ever, with them initially presented in an exclusive limited-edition box set from July 29, and each individual series available separately at a later date.

All the original 'Monty Python' books published by Methuen since 1971 will be reissued from October 3, while a new hardback, 'Monty Python's Flying Circus: 50 Years Of Hidden Treasures' - including a foreword by the comedians - will be available from Carlton Books on September 6.

New and exclusive merchandise will be released throughout the year, and Black Sheep Brewery will release a special 50th anniversary edition of Monty Python's Flying Circus cask ale - A Very Silly IPA for September and October.

'Monty Python's Flying Circus' aired for the first time on October 5, 1969 and on the actual anniversary day, the first official Monty Python Guinness World Record attempt for the 'Largest Gathering of People Dressed as Gumbys' will take place at a London.

Reflecting on their anniversary, the troupe commented: "Python has survived because we live in an increasingly Pythonesque world. Extreme silliness seems more relevant now than it ever was."

Fans wanting to take part in the world record attempt should join the Facebook group at www.facebook.com/groups/gumbyworldrecord