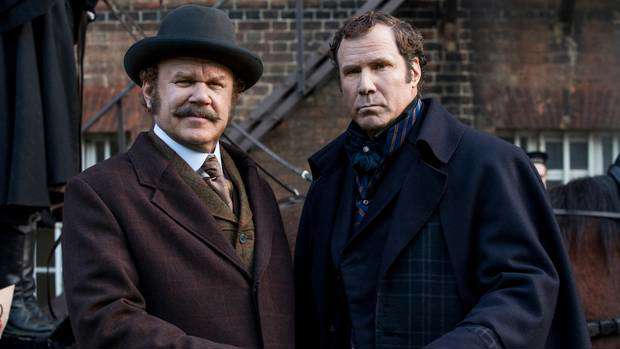 When Arthur Conan Doyle's first Sherlock Holmes mystery, A Study in Scarlet, was published in 1886 no one could have predicted – not even Holmes himself - that the crime-solving super-sleuth would become one of the most beloved characters in literary history. Similarly, few could have envisaged Holmes' escapades becoming the blueprint for more than 60 films, starting with the earliest known example, Sherlock Holmes Baffled, in 1900.

More recently, Guy Ritchie's swashbuckling, rock 'n' roll take on Sherlock Holmes and his sidekick, Dr Watson, with Robert Downey Jr. and Jude Law, has given the gung-ho duo a new, more contemporary audience. So too has the BBC series Sherlock, starring Benedict Cumberbatch and Martin Freeman, which has added a modern day twist to this age-old tale.

But just when you thought there was no other way to revamp Doyle's larger-than-life creation, along comes Will Ferrell and John C. Reilly, in Holmes and Watson, to have a stab at playing Britain's most intrepid investigators. As you'd expect from this pair, it makes things more spoof than sleuth, more silly than serious.

"With characters that have been done so many times in so many different films, we had to come up with something new, otherwise what was the point," says Ferrell, shrugging, as he explains their non-stop capers in Holmes and Watson. "What we came up with was a comedy version of them because it's always been done in a serious way, so to get to flip it around was exciting.

"I think to do a period comedy like this, with two iconic characters from literature, is completely unexpected – especially the way we're doing the movie, which is to take every licence we could think of," he adds. "I think it's going to be really fun to see a different aspect of their relationship."

Ferrell and Reilly are quick to clarify that the reason for their unique approach and parody of Holmes is not out of any disrespect though. Instead, it's out of reverence, as both are avid fans.

"I discovered these books as a college student and I devoured them," says Reilly. "Then I became obsessed with the Jeremy Brett version on BBC - I used to rent it out on video and loved his performances, particularly as it was the first version I'd seen that didn't shy away from the darker stuff that I knew was in the books, like his drug use and how tormented he was."

"He's such an icon," says Ferrell. "He's one of these characters who's made the leap to all different cultures – he's even huge in China. I think it's because of the spell Sherlock Holmes weaves, that whole art of deduction thing. He's able to take one certain element and figure out eight different things from it. I think people still find that fascinating."

Apart from their mutual adoration of Sherlock Holmes, there's another reason why Ferrell and Reilly were desperate to make Holmes and Watson together: it gave them the chance to rekindle their former partnership and on-screen chemistry from when they starred together in Talladega Nights and Step Brothers.

"It's been great to be back together with Will for this because it has been a while," says Reilly. "We've stayed friends and been in touch the whole time but it's nice to be working together again because I just feel that the work we did, there was something so special about it. That's why we didn't want to just do anything together; it had to be something that lived up to Step Brothers and Talladega Nights - something that has that level of absurdity, which I think this does..."

It certainly does with Ferrell and Reilly wringing out every last ounce of humour, banality and frivolity from their characters' attempts to solve a murder mystery that threatens the very life of Queen Victoria. It makes for some embarrassingly absurd and outrageously hilarious moments.

"Look, we're two American comedic actors taking on two of the most beloved characters in English literature. That's already pretty absurd in itself," says Reilly. "We did try to stay faithful to the books though, so we do the accents and speak in the vernacular of the time, wear the period costumes, the waistcoats and the cravats, and filmed on location around the UK. But although we're trying to do it as correctly as possible, we're not being too slavish about it, because then we'd lose the humour and the ability to move around in it.

"We couldn't have had more fun making the movie - every day was a blast," he says. "We feel good about it because we've put a lot of ourselves into it - we've poured our feelings into it and made it real. It was the same with Step Brothers; there was an emotional truth to that film, it wasn't just gags and pratfalls. And I think it's the same with this film, despite all the big, broad comedy, jokes and absurdity."

There are a lot of feelings, but there's just as much mayhem, goofiness and slapstick – just what you'd expect and wish from Will Ferrell and John C. Reilly back together again. It's "Elementary, my dear Watson".