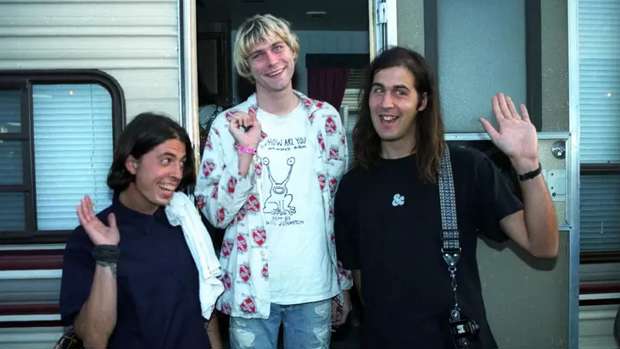 Dave Grohl is both one of the most successful drummers and songwriters in rock history and also one of the genre's nicest people.

Between his tenures with Nirvana, Foo Fighters and various side projects through the years, there are plenty of stories of Grohl being the coolest, funniest, most generous guy in the room. As Rock and Roll Hall of Famers go, Bruce Springsteen dreams about being every bit the everyman Dave Grohl is.

So of course Grohl himself is the one recounting one of his more cringeworthy deeds, which he did on a recent episode of the Good For You podcast with Whitney Cummings.

Grohl began to explain why he hates karaoke when he recalled one night, circa 1990, when he went out with Kurt Cobain, Krist Novoselic and Novoselic's ex-wife Shelli Dilley to a bar in Tacoma, Washington, during its karaoke night.

"At the time we were being kind of groomed by all these different record companies," the front man said. "We were getting [bid] on by all these [record labels]...but we had so many A&R guy cards. And we got wasted one night and gave an A&R guy card to a karaoke singer."

Cummings is then shown on video from the podcast (around the 13:30 mark) with a pained expression and her hand over her mouth.

"Is that terrible?" Grohl sheepishly asks. "That's bad. ...I don't remember which — it was either Kurt or me or Krist — and we gave it to her under the impression that we were an A&R guy and that we were gonna make her famous."

He then admitted, "I still think about it. ...I feel like that person still has that card. ...Damnit."

Grohl and the Foo Fighters don't have any tour dates coming up as they are currently hard at work on a new album, which the band expects to arrive in 2020.