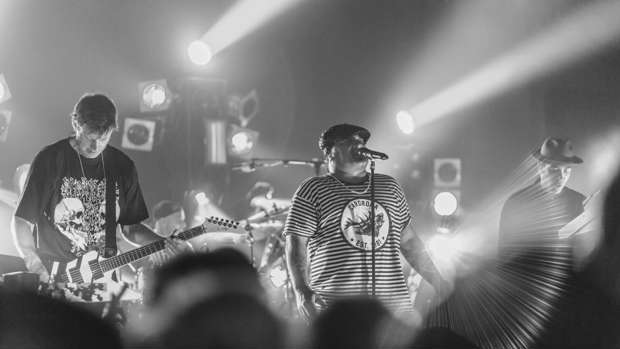 He may be the vocal vanguard of one of the country's most successful bands, but it is his humble beginnings in Flaxmere which undoubtedly shaped who he is today.

Shapeshifter frontman Paora Apera, aka 'P Digsss', spent his formative years in Hawke's Bay, testing his skills on the skate parks and in the waves, while also nurturing his innate desire to become a musician.

And although it has been 15 years since original members Sam Trevethick, Nick Robinson, Devin Abrams and Redford Grenell added the recurring guest to their permanent line-up four years after forming, Digsss still marvels at his success.

"It's been a slow progress but it is nice and rewarding when I get to do things that have directly come off the back of music ... I really love that," the rocker said.

"It's kind of a testament of how much work I've put into it and how much I've committed to being a fulltime musician. To be able to live off it and to not have to work in a cafe or build while I'm being a musician is pretty amazing. There are moments when I scratch myself and go 'shucks', from Flaxmere to here."

And while his visits back to the Bay are few and far between, performing in his hometown is something he treasures.

Speaking from his home in the South Island between Queenstown and Wanaka, P Digsss' "backyard" is the local skifield - where he spends most of his weekends off the stage.

"It's a pretty amazing spot. That's kind of one of the main attractions to living down here because it is a beautiful part of our country."

It's safe to say the outdoors is one of his loves.

"A lot of my life is spent absorbed in music and when I'm not, I'm snowboarding, skiing, surfing, riding motorbikes, mountain bikes and thinking of music - it is all intertwined. I got a lot of that initial energy and that vibe from Hawke's Bay as a child."

Their last single, Stars was released in 2016 and new music is on the radar. But rather than churning out a set number of songs for a new music, their new material tends to come about organically - a few of which have already been played in their gigs this year.

"I think we are going to just write a bit now, you know just get involved and go deep in the writing process again - enjoy that and then test them out over New Year's and the summer.

"Some naturally write themselves and some you have to chisel and sculpt away but all of that is a really fun process because you are just learning your music and perfecting your art - it is all a great journey.

"We are always open to giving words of advice and a few tips and a bit of inspiration where we can. It's fun because that's what it's all about; learning and sharing knowledge and sharing techniques, tricks and all sorts of stuff."

Over the years, Digsss has seen the music industry develop. As a youngster, it wasn't considered a career opportunity, more like a hobby.

"Now it is at the point where people actually recognise and understand that you can make a living off of it and you can be quite successful if you pursue it with enough of the right energy."

And as much as he helps other, Digsss still needs tips from time to time. "Every day is an opportunity to learn more. I've been doing it lots but I still have moments when if you are travelling lots and just low on energy, it can be hard to believe in your ability at times."