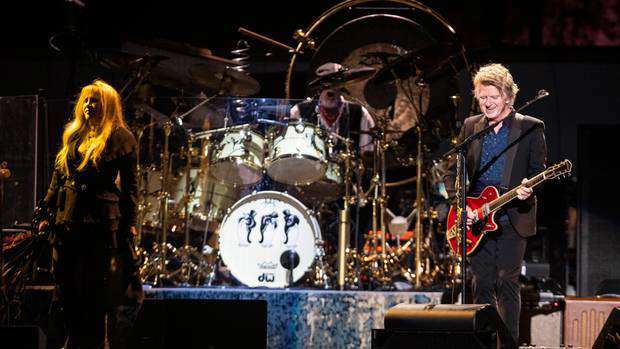 In the moment between walking on stage and kicking the night off with the blues stomp of The Chain, Neil Finn took a moment to shake off his nerves. As the newest member of Fleetwood Mac he'd been playing a run of successful away games but last night was the first in front of the home crowd. A quick waggle of his hands and he was off.

In a band of vocalists Finn's is the first voice you hear and the song's roaring chorus could almost be a challenge to fans still harbouring ill will about the recent departure of long-term - some would say critical - member Lindsey Buckingham.

"And if, you don't love me now," he sang as the chorus crashed around him, "You will never love me again," and there was a lot of truth in those two simple lines. Buckingham's departure may have required two world-class musicians to cover, Finn and guitarist Mike Campbell from Tom Petty and the Heartbreakers, but this is a new era for a band that have had more "new eras" than most.

At first the crowd was typically Auckland. Sitting through the apocalypse of that opening song and barely nodding their heads to keyboardist Christine McVie's mega-hit Little Lies which immediately followed. It felt like people were waiting for an invitation to cut loose and jump up out of their seats.

Taking matters in hand Stevie Nicks, clad in her traditional witchy black, addressed the crowd right after. "Let's get this party started," she said as the band floated into her sublime hit Dreams and the crowd finally woke up.

It was noticeable how much the band fed off the audience's energy. Later, during an extended drum solo that can only be described as thrillingly epic, Mick Fleetwood would repeatedly shout over his thunderous playing, "are you with me? Are you really with me?" and in those moments when Auckland was, really was, the band were on a different level.

The iconic hits they have up their sleeves and ready to unleash at any moment, songs woven into your life by virtue of them always being everywhere, can feel overwhelming in the best way.

Nicks, in a sparkly cape caught up in the emotion of signature tune Gypsy and busting out her trademark dervish spinning, McVie's jaunty pop banger Everywhere compelling the crowd to dance, and the dirty raucous blues of early hit Oh Well giving Campbell a chance to truly fry his fretboard.

"One of my favourite people is here tonight," Nicks smiled. "She's been one of my favourites since she come on the scene. Ella, this is for you," she said dedicating her moving acoustic ballad to Lorde.

The band took the time to reclaim their song Black Magic Woman from Santana, with Nicks' iconic voice giving the song an appropriately mystical vibe and McVie conjuring up a mean blues solo on her keys. And while they have their own hefty catalogue of hits to pull from, classics like Rhiannon, You Make Loving Fun, Go Your Own Way and Gold Dust Woman, they also found time for others.

For us locals hearing Fleetwood Mac covering Split Enz's angular I Got You is a true thrill and Finn's duet with Nicks on his Crowded House classic Don't Dream It's Over is a dream that's over too fast. Campbell's history got a shout out as well, the band playing Tom Petty's heavenly hit Free Fallin' in the encore.

With new recruits Finn and Campbell in the ranks Fleetwood Mac feels like a band re-energised and refreshed. Far from going through the motions they instead go for it and look like they're having a ball doing so. And while it took Auckland longer than the band to get warmed up, when the crowd finally matched the band's energy the night well and truly came alive.