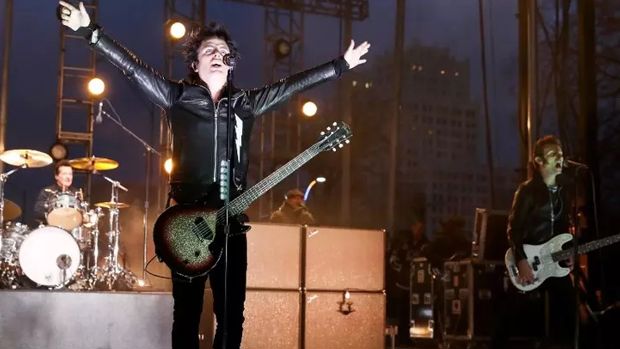 Green Day put on a wild performance during the NHL All-Star Game in St. Louis. The band not only played before the game outside the Enterprise Center, but also hit the ice to play during the second intermission.

But it wasn't the band's performance of its hit songs “Basket Case” and “American Idiot” that had people talking.

As most people would guess, the All-Star game brings a variety of hockey fans — both young and old — from all over so it came as a bit of a shock to non-fans when frontman Billie Joe Armstrong dropped more than one F-bomb on live television.

The NHL All-Star Game is not Green Day's usual crowd and while the cursing was censored on the network, the expletive-ridden performance apparently made it through on a second feed causing Green Day to trend on Twitter with over 17,000 mentions and counting.

Anyone know why we’re trending? We’ve been busy having a blast w the @NHL in St. Louis all night.

NHL: What ever you do, please don’t curse.
GREEN DAY: [laughing] OK.