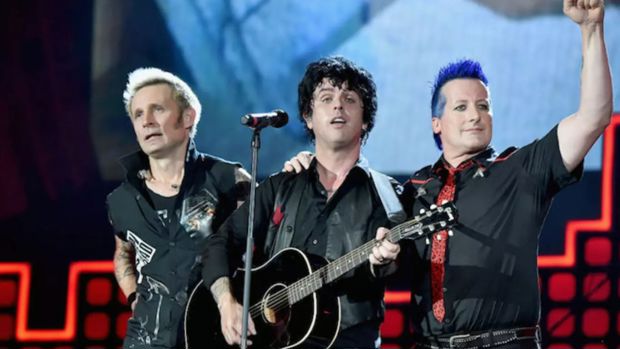 Green Day have made it clear they're working on new music, but what is it, exactly? A song? An album?

On Friday (January 7), the band shared a split-screen clip on social media. On the bottom, Billie Joe Armstrong strums and acoustic guitar riff while footage on the top plays in reverse. At first it's abstract images like trees and squirrels, but then we see Armstrong and his bandmates Mike Dirnt and Tre Cool up to some shenanigans. The video ends with the number "1972."

This isn't the first time we've seen that number. Last month, the trio revealed they were recording music at London's RAK Studio in another social media video. The brief clip was soundtracked by what appears to be a new song, and the number 1972 flashed on the screen. Though the significance of the number has yet to be revealed, it is worth it to note that all three Green Day members were born in 1972 and are turning 50 this year.

Could we get a new album to celebrate the milestone birthdays? Only time will tell. For now, see the band's mysterious post below.

If Green Day is indeed prepping a new album, it will be the follow-up to 2020's Father of All... and their 14th studio album. The rockers did release three singles this year — "Here Comes The Shock," "Pollyanna," and "Holy Toledo;" however, Armstrong explained that he wasn't sure where the new music would lead at the time.

“Whether we do a full-length album or an EP or just a song, we have a lot of different options. It’s a matter of whenever the right moment happens,” he explained last November. ​“That’s the beauty of the way you can put music out these days. You don’t have to wait for any gatekeeper to tell you that the timing is right.”