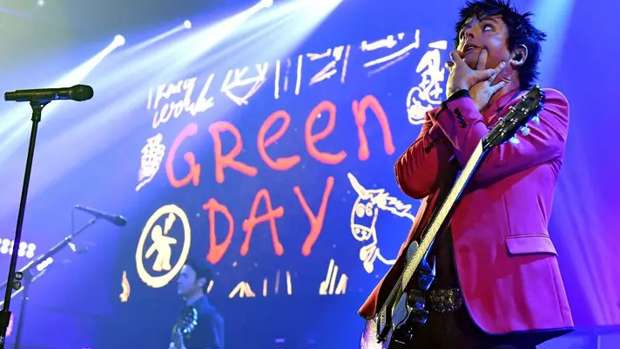 It's been four years since we've gotten a new album from a group that can easily be described as one of the most popular punk bands in history, Green Day. Following up their 2016 album Revolution Radio, the band is (finally) back and ready to kick off their latest release, Father of All. We know there's no better way to premiere a highly anticipated new album than with an iHeartRadio Album Release Party!

In addition to performing some nostalgic hits throughout the band's impressive 34-year career like "Jesus of Suburbia", fans were also introduced to brand new tracks, including "Oh Yeah!" and the new lead single, title track "Father of All…."

Before the Q&A session hosted by ALT 98.7's Harms, kicked off, we needed to address the elephant in the room - Billie's diehard dream of being in a soap opera. Earlier this week, the punk rocker posted a clip to his Instagram proclaiming his love for daytime dramas.

A fan front row at the iHeart Theater show sparked the protest for Billie by showing off a neon sign that read Put Billie on a Soap Opera!

In case you were wondering, this lifelong dream started about "a day and a half ago!"

Check out some questions from the Q&A below!

People were expecting one thing from the band - and you gave them something completely different.

Billie: Yeah, we did some different stuff. We're lifelong fans of the history of rock n' roll. Anything from Motown music to old Little Richard to Glam Rock and Hard Rock in the '70s, Van Halen in the '80s, and K-Pop of the current world right now. So, we're all about it."

What were some of the challenges of making the album?

Mike Dirnt: I think it's just finding your way into new sounds and new directions. It's a little nerve-racking when you're not sure, and I think that's a good place to be when you're heading into new music. But, we got a pretty good anchor.

Billie: I feel like we really wanted to give everyone a Rock N' Roll lesson. That's just something I grew up on, and it's apart of me. I listen to it every single day. I listen to new bands and old bands.

Was singing Falsetto on the title track "Father of All…" a challenge?

Billie: Yeah. We recorded the first part, and then I wanted to do a vocal. Then I was listening to Prince and stuff. The song "Sister," man that's a dirty a-s song. I was like, "f-ck it," I'm going to try and sing it a different way. I didn't want to sound like me or whatever me sounds like. So I told everybody, "try not to laugh. I'm going to try something new." Laughter… everybody laughed, but I did it anyway.

Instead of talking about what this album isn't - let's talk about what it is - 26 minutes long - for bands that have been around a minute - that takes restraint.

Billie: We recorded like 16 or 17 songs, which will come out at some point. It was just like, I'm going to pick my top 10 favorite songs. Well, that's the album right there. I think album making is always really important to us. We're an album making kind band. We're not just kind of relying on singles. You want to get into the serotonin and drugs of the album. So those were the ten songs, and we're like, "well, all of these can be singles, so let's just put out a ten-song record."

You're getting ready to kick off your joint "Hella Mega Tour" in March with Fall Out Boy and Weezer. Is there one thing that excites you more than others about these shows?

Billie: Yeah, you can taste the electricity!

Mike Dirnt: We should make a "Hella Mega" cereal. It can be like unicorn poop and then everybody will really throw up.

Who's responsible for the unicorn on the album cover art?

Billie: I drew the unicorn. Then I made the logo out of glue. I figured I was sniffing it, so I might as well make something out of it at the same time. This is a true story, and we were like, "what if we f-cked with everybody and called the record American Idiot Part 2. So then I had my copy of it, and we were like, "what if we call it American Idiot Part 2: Father of All Motherf-ckers?" So we just took out the idiot part and I wrote that in my handwriting, and I put some duck tape and kind of messed with it. Then because censorship you can't… so I just said we'll just put a f-cking unicorn on it.

What is it that allows you to play a range of venues and stadiums to a diverse group of fans?

Billie: (To fans) I love how you don't pander to people.

Tré Cool: We're a Rock and Roll band. We play everywhere. We love to play music. That's what we do.