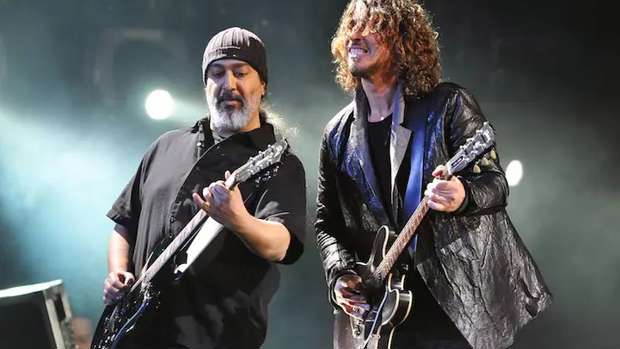 Before Chris Cornell's tragic death in 2017, he and Soundgarden were working on a new album. The singer had recorded a handful of demos, but the band currently doesn't have possession of those files — something Kim Thayil has been outspoken about this year.

During a recent radio interview, the topic came up again. When asked if there's an "obstacle stopping" Soundgarden from finishing the record, the guitarist's frustration became apparent.

“There shouldn’t be,” Thayil said, “other than the fact that we don’t have those files.” He didn't elaborate on why they still don't have their hands on those crucial files, so the conversation turned to discussing whether or not they could release an entirely new album if the surviving band members did have those vocal demos.

“Yeah, definitely, and I think that will happen. It would be ridiculous if it didn’t,” he responded bluntly. “But, you know, these are difficult things. Partnerships and property.”

During the interview, Thayil also reiterated that Soundgarden does not intend to go on without Cornell.

“Reasonably, you got a big part missing, so, I think in terms of the Soundgarden catalog, that’s going to be active as best as it can be. In terms of unreleased recordings, live materials, I’m still going to attend to that. That’s my gig. I love that. Let’s make records,” he said. “Given the commitments the other band members have and given our sentiments over Chris, I do not see us reconfiguring a tour—or anything—without him.”

“This is really complicated. I’ve known Chris since I was a kid, basically.You want to honor the work … Is it best to regard it with dignity and let it rest? Do you want to honor it by celebrating the work and music he’s done?” he asked, visibly emotional. “At this point—and this has been difficult for a lot of people in the band—I think our conclusion was that. Now I understand people are complicated and life is a bag of tricks. I don’t know. I think we reached a conclusion we thought was correct.”

Soundgarden was recently nominated for a Rock & Roll Hall of Fame induction, something Thayil considers "bittersweet" since Cornell won't be there to help celebrate if the band ends up getting inducted.

The inductees will be announced in January with the induction ceremony set to take place May 20 in Cleveland, Ohio.