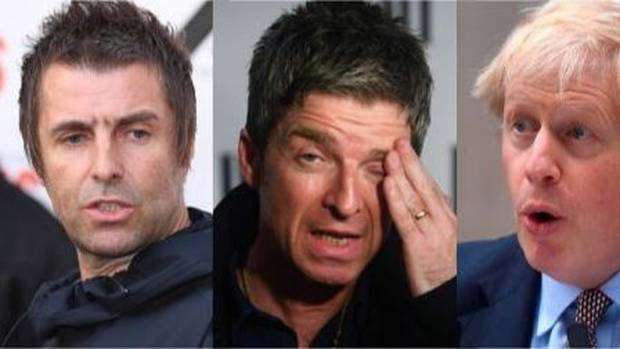 Noel Gallagher hasn't spoken to his estranged younger sibling since he quit their band Oasis in 2009 and he admits given a choice between Liam, 47, and British Prime Minister Boris, 55, he thinks the politician would be "more entertaining" than the singer.

In an appearance on Scandinavian talk show 'Skavlan', Noel was asked to pick one or the other to be his brother, and answered: "I would say Boris is more entertaining. His use of the English language is more superior."

However, the 'Wonderwall' hitmaker had to concede that Liam is "better looking" than Boris but he doubts he would get on with either of them.

Noel was quizzed as he sat alongside Boris' sister Rachel Johnson, and he was very impressed by her luscious blonde hair.

He said: "Rachel has got magnificent hair. We were watching a panel show on Sky recently, me and my wife (Sara MacDonald), and I said, 'She has got f***ing great hair.' "

Noel also admitted that his feud with Liam has become "exhausting" especially because he keeps blaming Sara for Oasis not reuniting.

The guitarist said: "He insults my wife a lot. It is nothing to do with her at all. And he threatens my kids and it all gets a bit stupid."

Noel and Liam are yet to have to be in the same room together since their bust-up but the 'Don't Look Back In Anger' singer accepts it will happen at some point in the future and he expects it to be an "interesting" day.

He said: "Nobody has got married yet so the situation has never arisen where we've all had to be together. But of course it'll happen and it's going to be interesting."

Liam is tying the knot with his long-term partner Debbie Gwyther next year and has invited Noel to the nuptials on the request of their mother Peggy.

However, Noel has firmly rejected his brother's offer, claiming that he hadn't been invited to Liam's previous two weddings so he won't attending this ceremony.

Noel said: "He didn't invite me to the previous weddings, so I'm not going to go to this one."