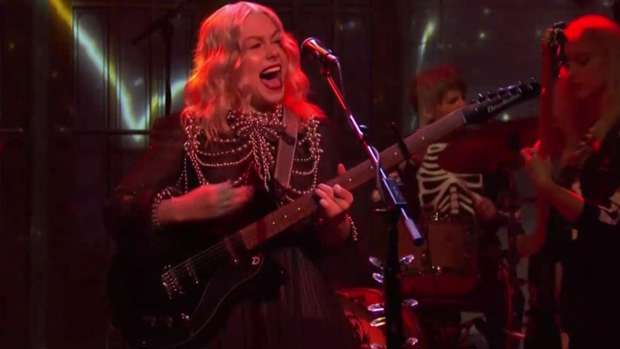 Phoebe Bridgers made her Saturday Night Live debut one to remember. The singer-songwriter treated viewers to two tracks off her latest album 'Punisher'. She played "Kyoto" for her first appearance, donning her signature skeleton onesie, and gave viewers a little surprise during her second song, "I Know The End." After a frenetic finish to the performance, the 26-year-old ferociously smashed her guitar on her amp, literally making sparks fly.

"Well, I was asleep, and then I woke up to a storm of text messages and I was like, either someone's dead or something good happened," she explained, recalling the moment she first heard the news. "But yeah, it was really nice. My mom actually bought a bottle of champagne, like two days before, just in case anything happened with the Grammys, which is hilarious and preemptive. Thanks mom, for that. But yeah, couldn't believe it."