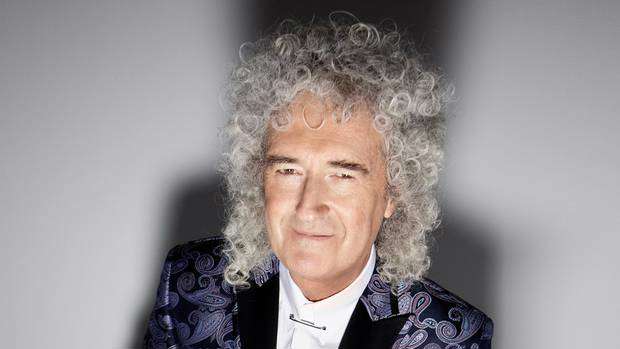 The man who wrote Queen smash I Want It All is opening up on the thing 45 years of rock stardom can't guarantee: happiness.

"I am a depressive personality and once you are, that's the way you are," says Brian May, softly spoken and gentle.

"I don't think you get cured of being a depressive. You just handle it. You just learn to deal with it. And I have dealt with it for many years."

We're talking a week into a new decade, days after May's heartfelt Instagram post about putting on a "brave face" while dealing with feelings of depression, hopelessness and fear throughout the so-called festive season.

Inspiration for the next 10 years ? Thanks to my dear friend Joe Elliott @defleppard I have this great image of my hero Jimi Hendrix on my wall to remind me to keep reaching for the stars. Ach ! A bit too glib for you ? Well, that’s my brave face. Most of this Christmas period I haven’t wanted to show my face because my face was grim. There’s something about this time of the year that paralyses me. Depression, hopelessness, fear ... I get engulfed. Is it logical ? No. Should I be grateful for my life and therefore NOT depressed ? Yes. But none of that makes any difference when you look up and the colours have gone out of the world. Tomorrow I am wrenching myself back into ‘normality’ - starting with some biking and stretching and hot and cold showering. Oh ! And the Veganuary quest ? It went OK on Day 2. Breakfast : half a grapefruit and crispbread with plant-based spread and home-made marmalade. Jasmin tea, black. Lunch : a Vegan Leggera Padana in Pizza Express with my littlest ones. That’s very easy - they do it all for you - they make it with Vegan cheese and it tastes just like ‘normal’ ! And for Dinner : some nice light veggies prepared by my amazing wife ! There are SO many great vegetables in the world - artichoke hearts, hearts of palm, roasted parsnips, new potatoes, and a rocket and tomato salad, perked up with Olive Oil and Balsamic Vinegar from dear old Luciano Pavarotti’s home town. Plus a nice selection of nuts and raisins. Hey ! This is a doddle !! Ha ha !! Well, we shall see ! Happy Friday folks ... we’ll soon be out of this murky Sargasso Sea ! Bri

The message struck a chord with many of his 2.1 million followers and May was overwhelmed by the response. Thousands applauded his honesty and told him they felt the same way.

"It was good to open that kind of conversation and the response I got was phenomenal," he tells TimeOut in a rare interview ahead of Queen + Adam Lambert's visit to New Zealand for The Rhapsody Tour.

"Ninety-five per cent of the people [who] responded felt like I did. Which is a bit of a shock, because you think that the whole population loves Christmas and are jolly.

"But the people that responded, most were feeling anxious or overloaded, worried or depressed and hoping that it would soon be over.

"That was a revelation to me and it actually helped me to know that I wasn't alone and I think a lot of other people felt the same way."

The 72-year-old has had a long-running battle with the Black Dog, after experiencing bouts of depression as a child.

In 2002 he admitted contemplating suicide first after the death of his father and again after Freddie Mercury died in 1991. He finds the Christmas holiday period particularly difficult but says he has learned to manage his condition.

"I'm still working through the tail end of it and it happens to me pretty much every year at this time," he says.

May swears by a near-daily ritual of cycling and stretching to help both his physical and mental state.

He urges others who may be struggling to get active and stresses the importance of disengaging from the modern world while exercising.

"Unless there's a good excuse, I do it every day. Rest days are okay now and again but I like to do it at least six days a week, especially when I'm in training for a tour. And it definitely helps your spirits, there's no doubt about it. It helps your body but it helps your mind even more, that bit of quiet time."May had doubts about airing his personal issues publicly but felt it was important to keep things real in the often artificial world of social media.

"I hesitated about talking about it on Instagram because I wasn't looking for sympathy or anything like that but at the same time Instagram has a tendency to be what they call 'my perfect life' — you just show the gold bits.

"I felt an obligation [to talk] about how I felt because I had a feeling that a lot of other people probably were looking at the streets and thinking, 'Everybody's getting this except me,' because that's the way I felt.

One thing helping lift his spirits was the prospect of returning to the road. The Rhapsody tour, a triumphant celebration of Queen's greatest moments, was heading for Japan — the fourth of four dates there is today — before reaching New Zealand.

May is particularly looking forward to performing outside Auckland for the first time.

"I've never seen these places and at my time of life I like that. It's nice to find places you haven't walked before."

An astrophysicist with a thesis about radial velocities in the zodiacal dust cloud, you sense that's as starry as May gets. The public perception has always been that Mercury was the wild one.

May has been happily married to former Eastenders actor Anita Dobson for two decades and is no stranger to political commentary, criticising Brexit and campaigning against badger-culling and fox-hunting.

Since Mercury's death, May has been the de facto spokesman for what is one of the great rock bands. Drummer Roger Taylor is now the only other member of the original line-up. May says they have had time in the studio with Lambert, but there's little prospect of new recordings.

This global victory lap of a tour notwithstanding, he's earned the chance to wind down.

Depending which estimate you believe, Queen have sold anywhere between 170 million and 300 million records.

But despite his trademark curly shoulder-length long having gone grey, his thoughts remain occupied with the future, and some more deep thinking.

Our conversation comes as the extent of Australia's bushfires is becaming seared on the global consiousness. May is shocked by a tragedy that has claimed dozens of lives and wiped out more than a billion animals. He's aware of the smoke that drifted across the Tasman, carrying an environmental threat for the West Coast of South Island.

"It's actually blackening the glaciers. It's frightening. What a terrible tragedy that is. It's appalling. I'm so sorry, it makes me so sad.

"The world is dealing with [environmental disasters] sooner than expected. That's the truth and it's a terrible shock. Unfortunately it's too late to save so many people and especially animals.

"Can that really be true? A billion animals? It's just appalling beyond belief. It's a tragedy beyond measure, isn't it?"

After leaving New Zealand, Queen + Adam Lambert will perform at Fire Fight Australia, a star-studded fundraiser for bushfire relief in Sydney on February 16.

He's also trying to help the planet by embracing a plant-based diet as part of the Veganuary Challenge.

Solutions to environmental problems lie in individuals accepting responsibility for their actions, he says, while acknowledging it takes time to create meaningful change.

"I have been shouting for a long time. I don't tend to shout much anymore, I tend to just keep on speaking. But you have to just engage people all the time in conversation and re-evaluating their behaviour. I count myself in that because I wasn't a vegan until the first of January this year. And I am for this month and we'll see how things go."