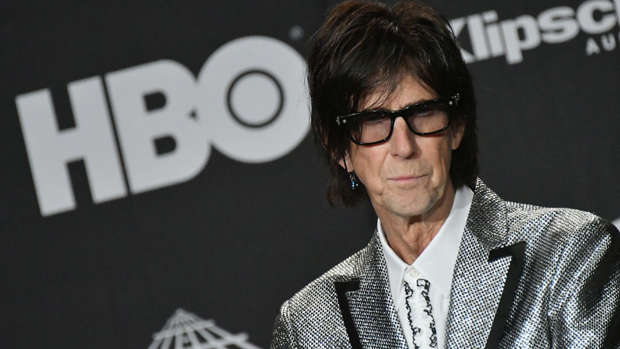 The Cars frontman Ric Ocasek was pronounced dead at the scene after being found at his New York City townhouse on Sunday (15.09.19).

The Office of the Deputy Commissioner, Public Information told CNN that the New York Police Department received a call about "an unconscious male" around 4pm, and his identity was confirmed by police.

Several stars have paid tribute to Ric, including Billy Idol.

He tweeted: "Sorry 2 hear about #ricocasek RIP loved his work with the band (sic)"
Slash took to Instagram to share a picture of Ric performing, but didn't write a caption.

The Cars shot to fame in the 70s, and were known for hits such as 'Just What I Needed', 'Drive', 'My Best Friend's Girl', 'Good Times Roll', and 'Bye Bye Love'.
'Drive' featured heavily during the 1985 Live Aid event, as a background song during footage of famine in Ethiopia. It was later re-released and raised money for the cause.

Ric met his wife Paulina Porizkova while filming the music video for 'Drive' - which is still the band's most successful single to date after reaching number three in Billboard Hot 100 chart - and they later married in August 1989.

The pair had two kids, Jonathan, 26, and Oliver, 20, but they separated in 2017.
Ric and The Cars - also made up of Benjamin Orr, who has also passed away, Elliot Easton, Greg Hawkes and David Robinson - were inducted into the Rock & Roll Hall of Fame in 2018, and described as a hook-savvy super-charged quintet on the website.
Their bio reads: "The Cars were the ultimate New Wave dream machine: a hook-savvy super-charged quintet that fused 60s pop, 70s glam and avant-rock minimalism into a decade of dashboard-radio nirvana."

The Cars split up in 1988 but the surviving members reunited in 2010 to record new album 'Move Like This'.

What's more, they performed for the final time at the ceremony for of their Hall of Fame induction.

Speaking about The Cars' history at the time, Ric said: "It's kind of weird because it's like a lifetime.

"It is a lifetime. I had three families during that time. They are like lives that go by and millions of people and things and artists and writers and business people and fans. ... It's a lot of stuff. It's been a pretty eventful life, I can say."