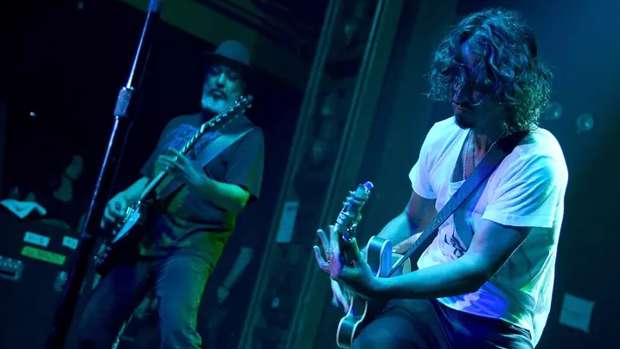 Soundgarden is attempting to have Vicky Cornell's lawsuit against it dismissed by asserting ownership over the suit's major point of contention, Chris Cornell's final recorded work with the band.

Chris's widow Vicky sued Soundgarden in December, alleging that among other things Soundgarden was withholding royalties in an attempt to 'strong-arm' her into turning over sessions for the album the band was working on prior to Chris's death in 2017.

Vicky claims the songs at issue are akin to any of her late-husband's solo work and that there was no explicit ownership agreement between Chris and his band mates.

A filing Monday from Soundgarden, however, claims Vicky provided the band no notice that she was considering a lawsuit. It adds that there's proof that the unreleased multitrack sessions were collaborations between the four band members.

"We don't have possession of our own creative work," the band told Rolling Stone.

Soundgarden points out interviews given by Chris and lead guitarist Kim Thayil going back to 2015 in which the two Soundgarden co-founders mention that work on a new Soundgarden album was being done as "emails between the band members (including Cornell) exchanging audio files and lyrics, file metadata through Dropbox..." and not entirely at Chris's home studio, as Vicky claims.

Furthermore, Soundgarden says there are recordings of the band members working on the new songs at their Seattle studio, the band claims.

Regarding Vicky's claim that the band is withholding royalties, Soundgarden denies it is hoarding any money, saying no band members are getting paid due to expenses and that must be dealt with before any of the band members are paid.

Since re-emerging about a year after Chris's death, Thayil alluded several times to friction between Vicky and the rest of the band. While the guitarist never mentioned Chris's widow by name, he did little to conceal his frustration at the process of negotiating with Chris's estate for the opportunity to finish the songs and the new album.

The band also took issues with Vicky's decision to file the suit in Florida, arguing that if the suit "survives" the band's motion to dismiss it, it should proceed in Washington.