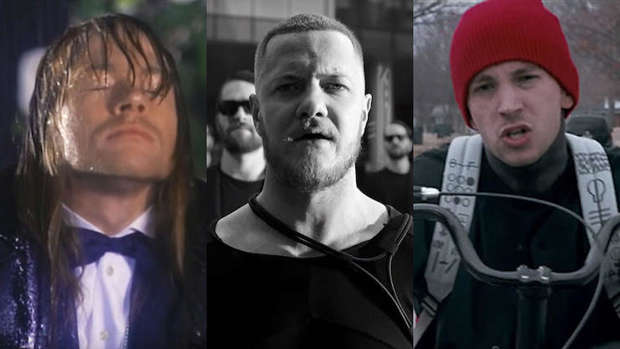 Garnering more than a billion views on YouTube is a big deal. In fact, out of the plethora of videos on the streaming site, less than 200 are in the coveted club. Though a lot of the top viewed clips fit under the pop umbrella, there are a handful of rock songs with three-comma views. In fact, Twenty One Pilots have two videos on the list, while Coldplay has three, and so do Imagine Dragons after "Radioactive" surpassed the 1 billion mark last month.

Though a lot of the most-viewed rock videos are contemporary, Guns N' Roses and Queen managed to sneak in with some classic hits, and there may be a few other entries that surprise you.

Check out the rock videos with more than 1 billion views below.

Twenty One Pilots — "Stressed Out"

Twenty One Pilots hold the spot for most-viewed rock music video on YouTube. Their Blurryface single "Stressed out" has been racking up views since 2015, and is currently leading the pack with a whopping 1.8 billion views.

Before Marshmello collaborated with Bastille and Chvrches, Coldplay and The Chainsmokers experimented with the cross-genre collaboration when they released "Something Just Like This." Clearly the test worked, because that was one of the biggest songs of 2017 and has racked up over 1.7 billion views on YouTube.

A year after releasing Blurryface, Twenty One Pilots wrote a song for the Suicide Squad movie. The "Heathens" video quickly garnered clicks and today has over 1.3 billion views.

Gotye — "Somebody That I Used to Know"

It's been a long time since we've heard Gotye's name, but in 2011 "Somebody That I Used to Know" was one of the biggest songs in the world. Its popularity resonated into over 1.2 billion streams on YouTube.

Ever since Chester Bennington's death in 2017, Linkin Park fans made it a goal to get the band's 2003 hit "Numb" up to a billion views on YouTube, and on November 8, 2018 they succeeded. Now, the video has over 1.2 billion views and counting.

When Guns N' Roses released their "November Rain" music video, it was far before YouTube came into existence. But apparently that doesn't matter, because ever since the band uploaded its iconic visuals onto the streaming platform in 2009 it's racked up over 1.2 billion views.

Coldplay — "Hymn For The Weekend"

Coldplay has been a band since the '90s, but it was their later material that really resonated with the masses. Aside from their collaboration with The Chainsmokers, their A Head Full of Dreams single "Hymn For The Weekend" is the group's most viewed video with 1.2 billion streams.

Not far behind "Hymn For The Weekend" is Coldplay's 2011 hit "Paradise." The Mylo Xyloto single has racked up just under 1.2 billion views on YouTube.

Imagine Dragons' most recent video to join the three comma club is the band's second single ever. "Radioactive" hit the 1 billion mark on September 4.

By far the oldest song on the list ("Bohemian Rhapsody" came out in 1975 (!!!)), the video recently got a remastered makeover to celebrate hitting 1 billion views.