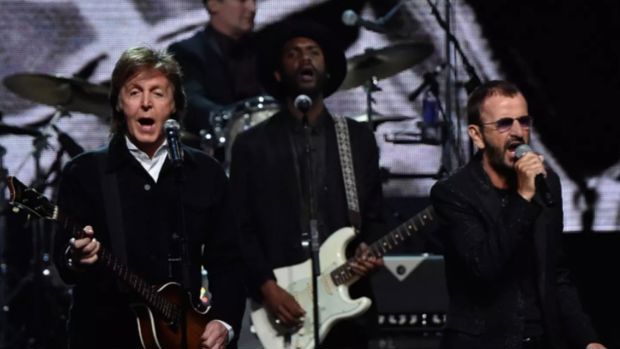 On Thursday (November 25), The Beatles: Get Back documentary premiered on Disney+. Now, the film's director, Peter Jackson, is reflecting on the band's attempt to make their own Lord Of The Rings movie back in the 1960s. According to Jackson, the Beatles had been seriously contemplating making their own version of the film however the project had falle through.

Jackson eventually went on to create his own Lord of the Rings trilogy, and while he was working on The Beatles: Get Back, he asked Paul McCartney why the project had fallen through. Jackson went on to share what McCartney had said with BBC News.

"I've been scraping together little pieces of information," Jackson told the outlet. "I've been interrogating Paul about it. Ringo doesn't remember much. What I understand is that Dennis O'Dell, who was their Apple film producer, who produced The Magic Christian, had the idea of doing Lord of The Rings. When [the Beatles] went to Rishikesh and stayed in India, it was about three months with the Maharishi at the beginning of 1968, he sent the books to the Beatles. I expected because there are three, he sent one book to each of the Beatles. I don't think Ringo got one, but John, Paul and George each got one Lord of the Rings book to read in India. And they got excited about it."

He went on to explain why the project fell through, sharing that the trilogy's writer, J.R. R. Tolkien, had no interest in having the Beatles create the films.

"Ultimately, they couldn't get the rights from Tolkien, because he didn't like the idea of a pop group doing his story. So it got nixed by him. They tried to do it. There's no doubt about it. For a moment in time they were seriously contemplating doing that at the beginning of 1968."

The Beatles: Get Back utilizes footage from when the band was recording their final album, Let It Be. Jackson was granted permission to access all 57 hours of video footage recorded while the band was creating the album, and spent four years working on the project. The film serves as an "unflinching look" at the recording of Let It Be, with Jackson stating of the project, "There's no villains, there's no heroes. It's just a human story."