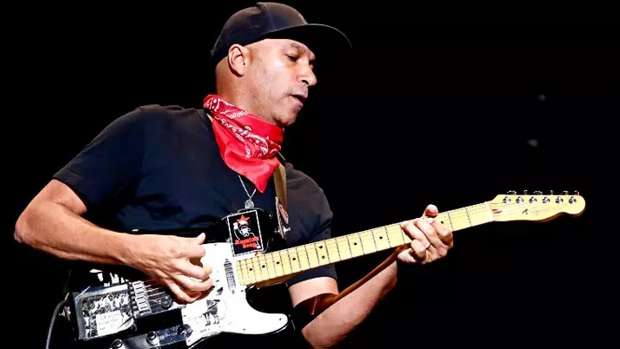 Rage Against The Machine's Tom Morello just wrapped up his Guitar Revolution camp where an unofficial announcement has fans and guitar lovers buzzing — and no, it's not just that the band is headlining Coachella.

On Saturday (January 4), an instructor at the camp by the name of Ryan posted a photo of the guitarist showing off a Soul Power Stratocaster. Along with the photo, Ryan captioned it: “Today, Tom Morello and Fender unveiled the Soul Power signature production model.”

At the time of publishing there is no video of Morello announcing this nor any other people present at the camp posting about the news either.

As many fans know, this was Morello's main guitar during his time with Audioslave. “When I was transitioning from Rage Against The Machine into Audioslave, I wanted a new sound and a new guitar, and a new vibe and style and a new slogan written on it,” he explained in a 2012 interview. “This is the main guitar for all of the Audioslave records and shows and tours.”

Many fans have spoken out about the potential collaboration and the reaction is 50/50. “Well I found something for Christmas 2020🤘🤘” one fan wrote while another said “about time.”

Other fans were a little confused about the rumored release saying the Fender endorsement goes against everything Morello believes in. “Making a career and a fortune bashing capitalism and corporations then coming out with a signature guitar called 'soul power' from one of the biggest guitar manufacturers in the world just feels kind of icky. I don't want to take away from Tom's talent but I would be interested in hearing how he reconciles this with his political activism,” a fan wrote in Ryan's post.

Neither Morello nor Fender have commented on the rumor so it'll stay just that for now until it's officially confirmed or debunked.