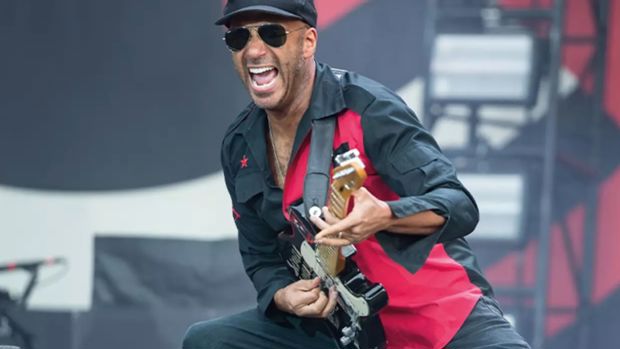 We all know Tom Morello from his time in Rage Against the Machine and Audioslave, but before he was in some of the most famous rock bands of all time he was just a college kid rocking out with his friends. Over the weekend, the guitarist shared an epic throwback of his Harvard band.

In the photo, Morello poses among his college bandmates. All five musicians are dressed in their best eighties ensembles. Though Morello would go on to become a rock star, he shared the other impressive careers his pals went on to pursue.

"1985 Harvard University rock band, Joey Thunder & The Electrical Storm, featuring 3 future surgeons, a software designer, and a guy who got several bit parts in the Star Trek franchise. Our debut single “Mazola Party” failed to chart," he captioned the throwback.

For those who may not know, Morello enrolled in Harvard as a political science major and graduated in 1986 with a Bachelor of Arts degree in social studies. Following his college graduation, Morello even briefly held a job in the offices of United States Senator Alan Cranston. Ultimately, though, Morello decided a career in politics wasn't for him.

Luckily, a few short years later, Morello formed Rage Against the Machine alongside Zack de la Rocha. During a recent interview, Morello praised his bandmate's talent. “In my opinion, [he's] the greatest frontman of all time," Morello raved of de la Rocha. "He’s the punk rock James Brown. There’s no one in the history of Western music that has the sort of the totality of spiritual commitment onstage and in the studio as that guy.”

Morello and de la Rocha have been bandmates for thirty years now, so, it's no surprise how highly they think of each other. Morello went on to say de la Rocha's talent is "matched with a brilliant intellect." Since he's a "tremendous musician," Morello finds it to be "an unbelievable combination." Ultimately, Morello says, he just feels "fortunate to be in a band with him.”