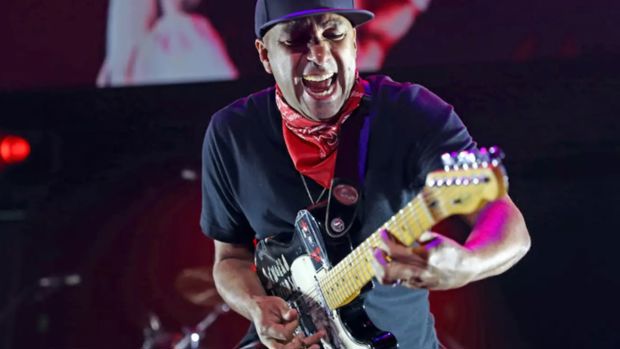 Tom Morello found a new way to engage with fans via social media. The Rage Against The Machine ax man launched a new game called "Guess The Song" where he plays the first two notes of a song on guitar and asks fans to guess what it is. After posting "Part 1," Instagram followers could not agree on a correct answer. From first listen, it sounds an awful lot like Green Day's "Brain Stew," which many commenters answered. But a good amount of people disagreed, proclaiming it's actually Ozzy Osbourne's "Crazy Train." Others thought it was Led Zeppelin's "Immigrant Song," and one person even insisted it's Olivia Rodrigo's "Good 4 U."

"For the first four months or so [of the pandemic] I was absolutely adrift. You know, I have a nice studio in my house, but I don’t know how to work it. Like, I don’t know how to move any of the buttons around. So I was like, ‘I’m not going to be able to play shows. I’m not going to be able to record music,’” Morello recalled. So how did he end up recording new music? Surprisingly enough, he took some notes from Kanye West.

“I was reading an interview where Kanye West said he recorded the vocals to a couple of his big hit records using the voice memo on his phone,” he explained. “So I did that. [I set my phone up] on a little folding chair. My laptop’s open so I can have, like, the BPMs in my ears or whatever, and the phone is balanced on the edge of the laptop on a chair facing the amp.”

“But you know, there’s no manual that says, like, ‘The voice memo of your iPhone needs to be 8.4 inches away from the top left speaker,’" Morello added. "I just set it up on a chair, and I’ve gotta tell you, the guitar sounded pretty freaking great.”