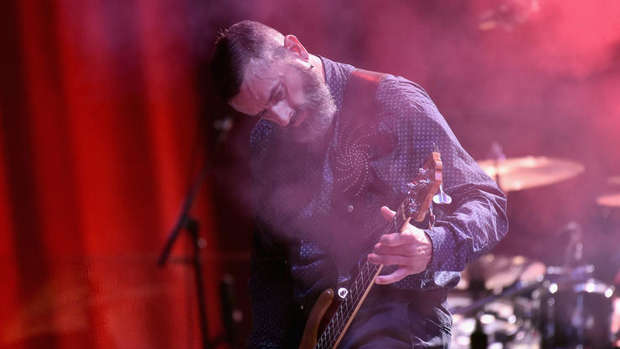 Tool bassist Justin Chancellor says there's one moment in the 1984 mock rockumentary This Is Spinal Tap that still haunts him on an almost nightly bassist when he's on tour.

Just like the airbase scene where Spinal Tap guitarist Nigel Tufnel, played by Christopher Guest, begins picking up a radio signal through his guitar which is then broadcast through the PA to the audience, Chancellor says he wrestles with the same issue.

"I don't know what I did to my main bass," he told Music Radar in a recent interview. "I've poured makeup into it, I've bashed it around — and we've gone in the back and cleaned it up. ... It sounds amazing and one-of-a-kind at this point, but it picks up a really decent radio signal if you're anywhere near an antenna."

Chancellor agreed that the issue is just like the scene in Spinal Tap.

"I have to stand in one particular position in order not to pick it up, and if you put a distortion pedal on, forget it," the bassist continued.

You'd think a band of Tool's stature, coming off a No. 1 album, would be beyond the problems of the luckless Spinal Tap depicted in the cult classic comedy, but Chancellor is just really attached to that particular bass.

He says he's intent on working through the problem at least until Wal Basses is able to send him a new version of his No. 1, which should be lighter and hopefully free of the radio interference issue.