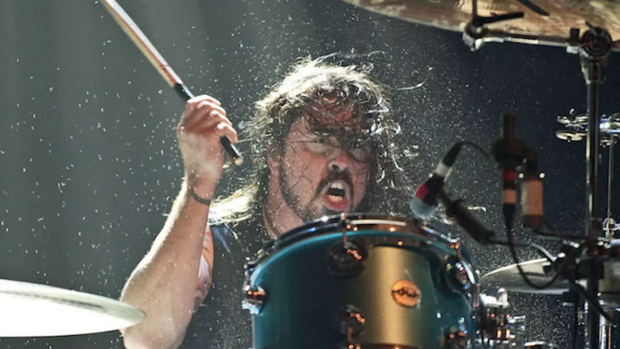 Dave Grohl is currently on the road in support of his new book The Storyteller: Tales of Life and Music but that didn't mean he wasn't going to treat his fans to some music.

During his New York City stop, Grohl performed acoustic versions of Foo Fighters classics like "This Is A Call," "My Hero," "Learn To Fly," "Best Of You" and "Everlong." He also got behind the drum kit to play along to Nirvana's hit "Smells Like Teen Spirit," which unsurprisingly caused the audience to erupt in cheer.

Grohl will be wrapping up his book tour at the Ford in Los Angeles October 12 and 13 before heading back on tour with the Foos. Watch him drum to "Smells Like Teen Spirit" below.

Dave Grohl had a solo event the other day at @TownHallNYC for his new book and played the drums over Smells Like Teen Spirit pic.twitter.com/JCZtnRlK9b

“I remember writing ‘Teen Spirit’ in our rehearsal space, and I liked the riff that Kurt [Cobain] came up with because it’s percussive. Those muted, stabbing strums in between the chords really leant to the pattern of the drum riff," he recalled. "To be honest, at that point, we were listening to a lot of Pixies– it was Bossa Nova [era]. And we were just having fun, really. We were just coming up with new song after new song every day. Krist Novoselic, I believe, has boom box recordings of all of these – riff ideas that were never used, songs that were shaped into songs for Nevermind (some of them)."