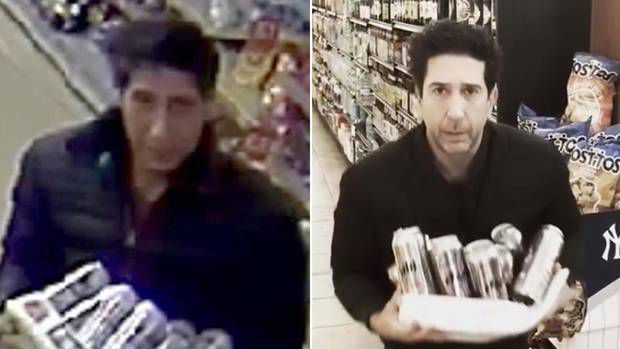 A British man has been jailed for nine months after CCTV footage of him went viral around the world due to his uncanny resemblance to Friends actor David Schwimmer.

Abdulah Husseini, 36, was described in court as a "wandering, nomadic thief" as Judge Sara Dodd jailed him for offending she described as "habitual".

Husseini used a stolen credit card to purchase beer and the CCTV image of him carrying it to the till that was released by Blackpool Police soon went viral.

The original post read: "Do you recognise this man? We want to speak to him in relation to a theft at a Blackpool restaurant on the 20th September."

However, Facebook users were quick to point out the similarities with the US actor.

One person quoted the famous theme tune by the Rembrandts: "So no-one told me life was going to be this wayyyy."

Another said: "I heard his getaway driver was stuck in second gear..."

Nick Croston said: "I don't think it's been this guy's day, his week, his month or even his year...."

"I have just seen him at Blackpool zoo with a monkey on his shoulder," Karen Long wrote in reference to Ross' pet monkey on the hit sitcom, Marcel.

Even David Schwimmer got in on the joke, tweeting out a video of him recreating the crime.

Officers, I swear it wasn't me.
As you can see, I was in New York.
To the hardworking Blackpool Police, good luck with the investigation.#itwasntme pic.twitter.com/EDFF9dZoYR

The court heard that Husseini had 32 previous convictions, including 27 offences for theft and dishonesty.

His lawyer said that he had been struggling with addiction but was working through his issues.