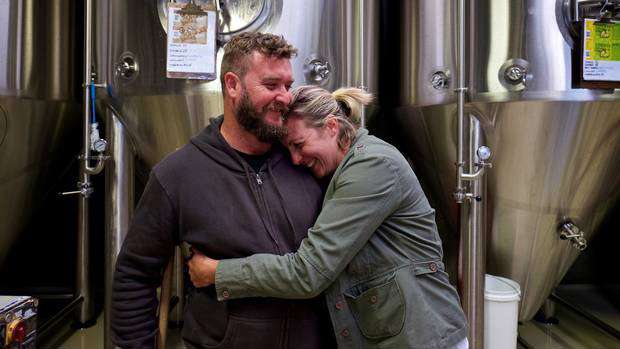 Joe Wood walks into a sparse room in a bland industrial block north of Auckland, spots a fish, and greets it like a long lost friend.

"There it is," he says, removing it from the top of a filing cabinet. He grins and caresses the fibreglass fish. "Twenty-five pounds," he says. His eyes light up. "That was a good memory."

He was so proud of it, he had it stuffed. It was the last fish Joe caught, he estimates, two years ago. The fishing boat he owns with his wife, Christina, hasn't left their driveway since.

Why? Life got crazy. Down the back of an unassuming block of Helensville shops, Joe and Christina run Liberty Brewing, a six-strong team responsible for making some of New Zealand's best, and most sought after, beers.

According to Untappd, a well-regarded app that allows users to track and rate each beer they drink, Liberty's Prohibition Porter, which spends nine months ageing in whisky barrels, is the best beer in New Zealand.

Citra, one of the first beers Joe made in a garage in New Plymouth 10 years ago, a double Indian Pale Ale with notes of mangoes, guava and lychee, is also in the top five. As a brewery, Untappd has them in second place.

Awards? They've won pretty much everything, from Brewers Guild Awards to NZ Beer Awards and Society of Beer Awards. Ask any beer geek about Liberty's range of beers, now into double figures, and they'll get a glassy look in their eye.

"All their beers are clean and high quality - there are no faults," enthuses Michael Donaldson, a beer writer and judge in the upcoming New World Beer & Cider Awards. "No flavours or textures feel out of place. It's coherent and integrated flavour."

That's a bit technical for Joe, who does the brewing, and Christina, who handles the business side of things. In the over-sozzled world of craft beer, they're rock stars, but they don't act like it. At beer events, Joe gets mobbed. "You see the beer geeks edging closer to him," says Christina. "They love him. They want to be his best friend. Sometimes there'll be a line. They get so close to him."

Reclining in a well-used armchair, wearing gumboots, stubbies, and a green T-shirt grubby from filtering four batches of beer, Joe shakes his head. "I try and stay home as much as possible," he deadpans.

Ask him about his skills, the awards, their success, and he downplays those as well. "It just seems like a bit of a fluke. I don't consider that we're a particularly high level with what we do."

He tells Weekend he could teach us everything he knows in a couple of weeks. "It's like a language, once you learn it, you know what to say. As long as you don't f*** it up, it's going to come out sweet as."

Christina thinks differently and calls him "a genius ... it's so annoying - he wins every argument". She shows Weekend his recipe for Darkest Days, an oatmeal stout, which he's brewing today. It runs to two pages, features words we've never heard of, has minute temperature measurements written in boxes, and seems incredibly complicated. How'd he work that out? How'd they get here? It's an unlikely story. Joe started brewing beers in a garage in New Plymouth around the time Christina gave birth to their first child 10 years ago.

It was a hobby from his day job in shipyards, and he was ordering so many items from an online homebrew supply business that he became their biggest customer. When offered the chance to buy the business, the pair said yes. "The idea was I could get all my ingredients for free, pilfer it from the business," says Joe. "It was a pretty rubbish website."

They started brewing as a way to showcase what could be made with the ingredients they sold. They sent Joe's recipes, which they still use today, out with homebrew kits. Word spread, and demand grew. Brewing in just 300-litre batches, they started supplying bars and bottle stores. Citra was the first one to go nuts.

"We heard of people who were living in Wellington, driving up to Palmerston North, cleaning out the bottle shop and driving back with as much as they could get because it was very hard to get your hands on," remembers Christina.

They moved back to Auckland, went to the bank, borrowed some money, and built a brewery in Helensville as big as they thought they'd need. "I thought, 'That's it, it's a f***ing big brewery now'," says Joe.

Six months later, they had to expand, taking over several warehouse-sized spaces at the back of the block. They're nearing capacity again now. Liberty keeps winning awards, and demand keeps growing. To get any bigger means another move, more equipment, more storage space, and more money from the bank.

To cope with demand, they've opened a tasting room across the road, where staff share free drinks after work, and fans can enjoy one of a dozen beers on tap from Friday to Sunday.

It sounds glamorous; they say it's not. "It's a little less romantic than what people think in their head when they come and see it," admits Christina. As Joe's stained shirt shows, it's hard yakka. "People say, I want to have a job brewing beer. Cool, come hang out with us, work on the bottling line for 10 hours," he says. But people still want to work for them: they get sent CVs from around the world every week, and a recent Facebook ad drew 35 applications in just five days.

They say few are up to the repetition required to brew beer to a consistently high standard. Joe finally hints at how he's got so good at what he does when he says: "No matter what the beer touches, it has to be perfect, or you're not making decent beer."

Ahh, beer. At the end of the day, that's what it's all about. Surprisingly, despite being around the smells of malt and hops all day, Joe and Christina still enjoy unwinding with a cold beer at the end of the day. As long as it's not one of their own. "There's more often Steinlager in our fridge than our own beers," reveals Christina. Their friends find this disappointing. "People will turn up to our house and we will have no beers, or there'll be Steinlager," she says.

"People expect it," says Joe. "They say, 'Where's your Citra?' But I don't feel like drinking 9 per cent beer every day," he says. There's a good reason for that: he can't afford the hangover. They're just too busy.

Riverhead's Hallertau bar and restaurant boasts an expanded beer garden now, where you can sit in the sun, tuck into a dedicated food menu and enjoy craft beer on tap. Each item comes with a beer match: there are smoked chicken drums with chimichurri and braised beef croquettes to whet your appetite, chorizo and mushroom pizza to share around, and roasted lamb shoulder for something heavier. Hallertau's known for its jalapeno poppers, and they don't disappoint. Down a couple of those and you'll have to order another beer - they recommend their pale ale #2.

Brothers has sister sites in central Auckland and Orakei, but Mt Eden is where you'll find their main production brewery. Its retro interior overlooking the brewery has expanded out into a sunny courtyard, where you can enjoy one of their six beers - go for Tropical in summer, Black in winter, and their pale ales any time - then order from an impressive barbecue-inspired menu that includes brisket slow-cooked for 14 hours, lamb smoked in kawakawa, and lamb and pork ribs. Vege? Go for the smoked tofu sandwich, and order plenty of pickles on the side.

If you're looking for craft beers, Brewers Co-op has one of the best ranges in Auckland. You'll find Epic, Tuatara, Liberty and Good George all side-by-side. Confused? There are descriptions of each above the taps, so you'll know what you're in for. Their seafood-heavy menu is large too; go for the four pepper squid, the coconut fire prawns or the popcorn shrimp, and add a few crumbed oysters into the mix. If that's not enough seafood, you can order fresh fish in a burger, taco or curry. And if that's not enough, there are beef and fried chicken burgers to help soak up the beers.

The New World Beer, Wine & Cider awards have been judged and results will be released in late May. Visit newworld.co.nz for more information.