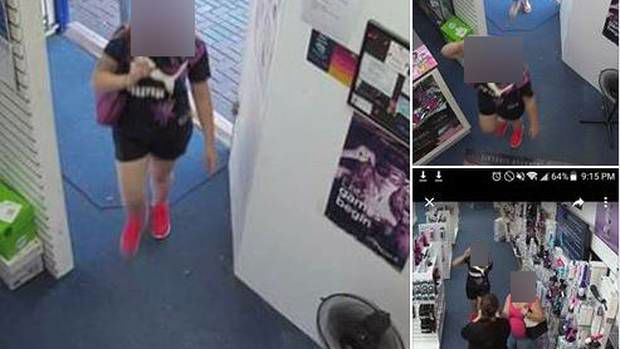 Two women have been dubbed the "butt plug bandits" after being caught on CCTV footage stealing sex toys from an adult store in Lower Hutt.

The two women were seen stealing butt plugs from the Peaches and Cream store in Lower Hutt on Sunday, just before 7pm, and police is now hunting for them.

According to the store manager, they used a well known shoplifting tactic, involving walking in together, then splitting up inside the store, with one of them chatting with the staff while the other hides away filling a bag.

Photos of the women have been widely shared on social media, with many identifying them as being responsible for other thefts in the region.

The store manager told the Herald that putting their photos on the shop window and on social media will help identify them.

"People see the photos and identify them. It really works. We're gonna do this a lot more. Also to share with our businesses who have the same problems."

The CEO of Peaches and Cream told the Herald the stores have seen an increase in shoplifting over the last six months.

"It's an ongoing thing at the moment," she said. "A sign of the times, to be honest."

"I don't know why people feel the need to shoplift sex toys. It's not like they're a necessity or anything."

She estimates the company is dealing with at least one instance of shoplifting a week across its 12 stores. To try to curb that trend, Peaches and Cream has a "wall of shame" on its Facebook page, where it publishes photos of the suspects.

"It really helps. Some people come back and pay for the products, to get their photo taken down," she says.