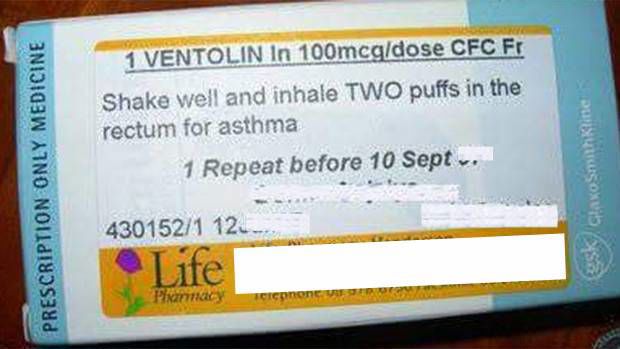 A pharmacist's unfortunate mishap when writing instructions for a West Auckland patient's medication has gone viral after resurfacing online.

A Life Pharmacy pharmacist issued a Ventolin inhaler for a customer suffering from asthma but when the patient picked up the medication, the instructions were rather baffling.

"Shake well and inhale TWO puffs in the rectum for asthma," the prescription read.

The photo of the unfortunate instruction mix-up has resurfaced numerous times over the years and now an Auckland pharmacist has finally explained that the mishap is an easy mistake to make.

A pharmacist, who did not want to be named, explained that they use a lot of shortcut labels on prescriptions and that a spelling error would have completely changed the meaning.

"I'm always scared I will put this on a script. We use lots of keyboard shortcuts for writing labels, and a lot of them are Latin based. What should have been PRN, which stands for pro re nata (when required), lost an N to become PR which stands for rectum," he said.

A Kiwi doctor gave an example of how it should have been written in shorthand, saying: "If I were to rewrite those directions in shorthand they would look like 'inh (inhale) 2 pfs(puffs) po(by mouth) q4h(every 4 hours) prn(if needed)'."

Kiwis have taken to social media to poke fun at the situation, with both pharmacist and patient in the firing line.

"They clearly got confused between asthma and assma," one person wrote.

Another said: "No wonder New Zealand's asthma sufferers have never been cured."

"We've been taking out oral medication wrong this whole time!" one wrote.

According to the New Zealand Asthma Foundation, Ventolin inhalers should be taken orally.

They say that the inhaler should be held upright before being shaken thoroughly.

"Push on the top of the canister all the way down while you breath in deeply all the way.

"Take the inhaler out and close your mouth."