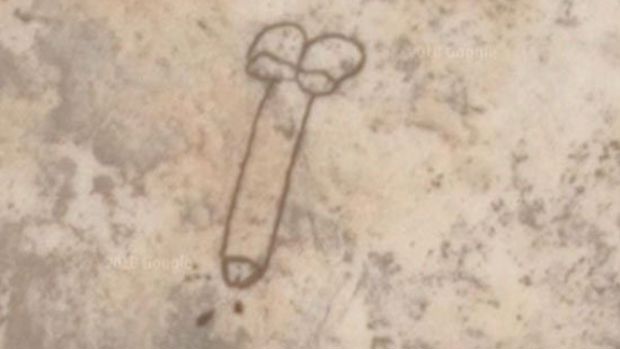 ‘A giant penis you can see from space’ – cue every male saying ‘guilty’.

There are a lot of natural wonders in the world, but this man-made depiction of a natural wonder just became the best thing to look at on Google Maps.

A gigantic penis had been carved into the bed of a dry lake in the south west of Australia, giving ‘Down Under’ a whole new meaning. The drawing could be found in Marcus Hill, a little way out from Geelong, Victoria, and appeared online on Friday afternoon.

An unnamed artist was behind the masterpiece, which has come to be known as ‘Aussie’s wiener’, and it was so big that it could be seen from space. Disappointingly, the drawing has since been washed away, but it will live on through Google Maps until they update their pictures again. Which I hope never happens.

9Pickle reportedly spoke to the artist behind this wonderful addition to the world, but he didn’t give his name away. He explained that he drew the penis with a friend, and they committed to the work for a couple of hours.

The drawing was approximately 50 metres long – which, to help you get a clearer idea of the enormity of the penis, is the same length as an Olympic-sized swimming pool. It is quite possibly the world’s largest penis.

The artists were first able to appreciate their work when one of their uncles spotted the penis while checking out his land on Google Maps.