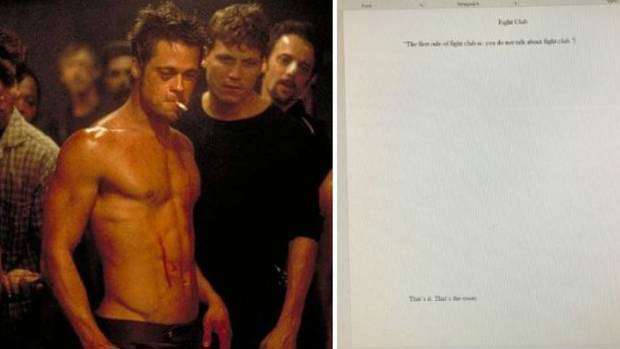 A student managed to get a perfect score when bravely sending in a 19-word film review to her professor.

Allison Garrett revealed on Twitter that she took her chances when an opportunity arose after her class were assigned to write a review on a movie.

The plot involves two characters who play the split-personalities of an insomniac who starts an underground fight club.

And Garrett boldly chose to write only 19 words from the film's most-quotes lines to represent her review.

"The first rule of fight club is: you do not talk about fight club," she wrote.

At the bottom of the essay she wrote: "That's it. That's the essay."

the assignment description for essay 5 was to write a review on a movie that we had seen. the opportunity arose, and i took my chances.. pic.twitter.com/1l1rMS2zg3

Her post also shows the student's assignment submission page where she swore she was proud of her assignment.

"I cannot say that I am sorry because that would be a lie. Am I proud? Yes," she said.

The last photo unexpectedly reveals that her teacher was quite impressed with her "humourous" essay and gave her a score of 100/100.

"I struggled over this grade for a long time. I finally decided you get a grade for a laugh and how relevant your review is for this particular movie," her teacher wrote.

"Let me warn you: do NOT try this kind of thing with other professors; they may not have my sense of humour."

Below, in the comments, Garrett wrote: "I was always told life is about taking risks. I was scared to say the least."