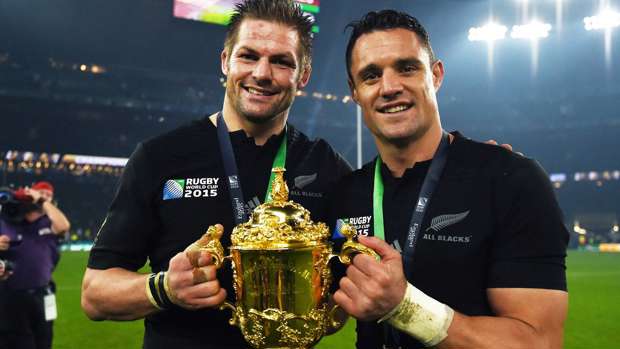 Dan Carter and Richie McCaw, two of New Zealand's sporting crown jewels, were not only World Cup winning teammates with the All Blacks, but also good friends outside of rugby.

But one moment off the field, or rather in the air, "really tested" their friendship, says Carter.

After retiring in 2015, McCaw revealed that he was working towards becoming a helicopter pilot, and while he was training towards taking his calm and composed demeanor to the skies, he offered his good mate Carter a helicopter ride.

What he didn't tell Carter, however, was that it was his first time flying with passengers, which the former first-five would later learn – with Carter joking that it put a strain on their friendship.

"If I had known that I probably wouldn't have gone up with him," Carter told Seven Sharp. "But for him not to tell me that he had never flown with passengers before, you know that was really testing our friendship there for a while."

But thankfully, the legendary duo landed safe and sound – and both have since moved on towards successful post-career endeavors.

McCaw became a commercial helicopter pilot and is a director and shareholder at Christchurch Helicopters.

Carter is currently promoting his upcoming documentary Dan Carter: A Perfect 10, which is slated to be an "all-access" look into the All Black legend's private life.

In the documentary, he opens up about some of the tough times he went through during his career, including tearing a groin tendon during a training session at the 2011 Rugby World Cup which would see him miss rest of the tournament.

He says that was the biggest disappointment of his career.

"I haven't really spoken too openly about it," Carter told Seven Sharp. "A lot of the emotions and the way I was feeling was kind of kept behind closed doors. But in that time and in that moment, it was probably one of the most challenging things that I've been through.

"I've only cried a couple of times with injuries. This was definitely one of them. I just kind of sobbed all the way back to the hotel and hid in my room for a day or two."