Three-time grand slam winner Andy Murray has announced he had resurfacing hip surgery in London on Monday, but the former world No 1 may have revealed a little more than he intended.

The British star, who crashed out of the first round of this month's Australian Open, announced plans to retire in by the end of this year due to persistent injuries.

Hinting that surgery could be his only option, Murray confirmed he had gone under the knife with an Instagram post overnight showing off his new metal hip.

"I underwent a hip resurfacing surgery in London yesterday morning ... feeling a bit battered and bruised just now but hopefully that will be the end of my hip pain," he wrote.

"I now I have a metal hip as you can see the second photo and I look like I've got a bit of a gut in photo one."

I underwent a hip resurfacing surgery in London yesterday morning...feeling a bit battered and bruised just now but hopefully that will be the end of my hip pain 😀 I now have a metal hip as you can see in the 2nd photo 👉👉 and I look like I've got a bit of a gut in photo 1😂

But the 31-year-old's surprise hospital snap wasn't just what caught the eyes of his 1.6 million followers.

"The X-ray shows more than his hip tho [sic]," one fan pointed out.

"You can see ya c*** in the second one mate," another wrote.

The picture racked up just under 100,000 likes in an hour as well as plenty of eggplant emojis. 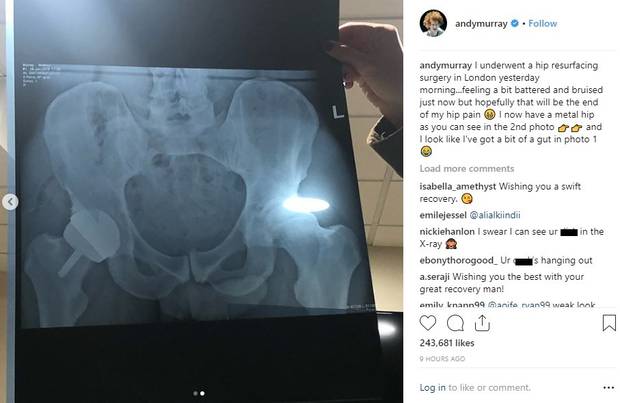 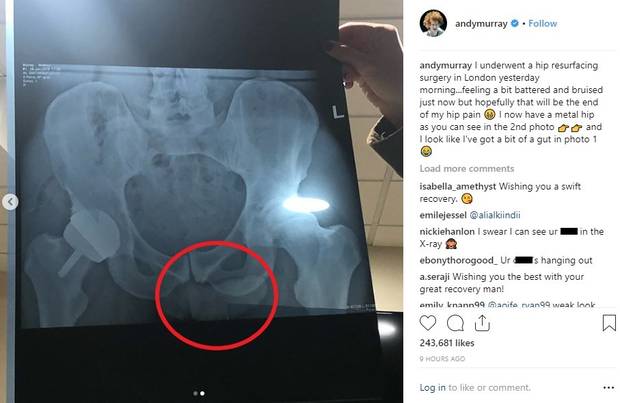 Murray was due to play in the Marseille Open in February but withdrew from the competition on Friday. He has not mentioned whether he plans to play at the All-England Club, but he now expects to be pain-free.

Following his Australian Open defeat, Murray assured fans he would try to make it back to Tennis.

"Maybe I'll see you again. I'll do everything possibly to try," he said.

"If I want to go again, I'll need to have a big operation where there are no guarantees I will be able to come back from. I will give it my best shot.

"I have basically two options. One is to take the next four-and-a-half months off and come back for Wimbledon.

"But if I have an operation like that, there are no guarantees I can come back from that."