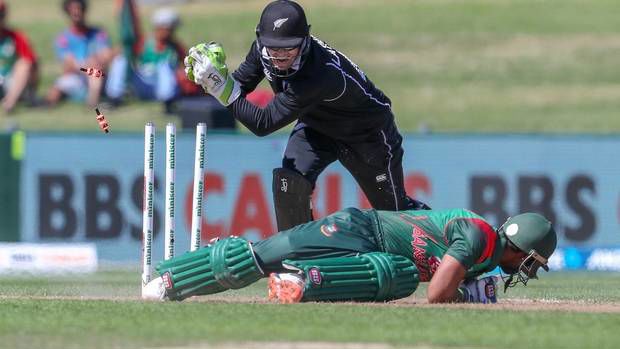 Whatever the reason may be, the facts are the same – for the first time since 2017, the Black Caps produced a century partnership for the opening wicket of an ODI, as Martin Guptill and Henry Nicholls led their side to an eight-wicket win against Bangladesh, in just their second stab as New Zealand's top-order combination.

Guptill (117 not out) and Nicholls (53) added 103 for the first wicket, impressively ending a streak of 16 ODIs where New Zealand had failed to put together an opening stand of more than 34.

Sure, they weren't under much pressure. Chasing 233 at the relatively small confines of Napier's McLean Park, Guptill and Nicholls could take their time to build an innings, with Nicholls at one stage scratching around on 19 off 42 balls.

Obviously, that wouldn't be good enough if batting first, where they would have had to take a more aggressive approach in a quest for their desired total of at least 300. And while we are still yet to see that strategy pay off, after over a year of failure, finally the Black Caps can have some confidence in their opening options going into the World Cup.

Perhaps that – boosting morale – is all this series is good for. The early signs are that Bangladesh will be much like Sri Lanka – there will be some promising moments, but ultimately they shouldn't challenge unless something goes utterly wrong for the Black Caps.

If that sounds harsh, well Bangladesh didn't do much to inspire positivity. Matt Henry and Trent Boult again shone with the new ball as the visitors were reduced to first 42-4, then 94-6, and while Mohammad Mithun (62) and Mohammad Saifuddin (41) led them through to 232, their bowlers showed less resolve, with their best options being economical, rather than a threat to take wickets.

While the Black Caps' inability to wrap up the innings – for a second straight ODI – might raise a slight concern, the form of Henry and Boult is an undoubted positive. As a new-ball partnership, Henry and Boult have now combined to take 17 wickets in the last three games, at an average of 12.5, and they got just enough help from Lockie Ferguson (2-44) and Mitchell Santner (3-45) to make the target simple enough for the batsmen.

Then, after struggling with the bat against India, the Black Caps would have been buoyed by how routine they made the chase. While Kane Williamson's rough patch continued – now eight games in all formats without reaching 40 – Guptill ended his own poor form. Having not passed 15 in his last six ODIs, Guptill looked at his best in reaching his 15th ODI century from 103 balls, and with Ross Taylor adding an unbeaten 45, the hosts cruised home with 33 balls to spare.

Bangladesh remain winless in New Zealand – now 0-11 – and if today was any indication, there could be two more victories – and some much-needed confidence – heading the Black Caps' way.