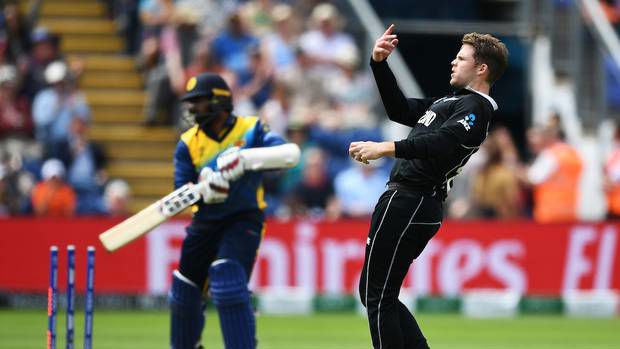 By Niall Anderson in Cardiff

For their opening act at the Cricket World Cup, the Black Caps could hardly have produced much better.

A 10-wicket thumping of Sri Lanka has seen New Zealand start their World Cup campaign in superb style, rolling their rivals for 136 and requiring a mere 16.1 overs to ease to a statement opening victory.

A better way to begin their Cup quest would have been unrealistic to imagine, with the Black Caps benefitting from a toss victory, a green wicket, and frankly, poor opposition as they romped to their third 10-wicket win in World Cup history.

But while those factors were all beneficial, the Black Caps' bowlers hardly put a foot wrong, cashing in on their favourable circumstances with a dominant display of seam bowling. And then, to top it all off, the under-pressure opening partnership of Martin Guptill and Colin Munro combined for their biggest stand, in the process giving the Black Caps' Net Run Rate a potentially handy boost.

It was a relatively simple task the pair were given however, after their bowlers set things up with aplomb.

Matt Henry – given the new ball after Tim Southee was ruled out with a right calf injury – led the way, taking 3-29, and he needed just two deliveries to make his mark.

After a loosener down leg was flicked away for four to open New Zealand's World Cup, Henry's second ball was the real sign of what was to come, trapping Lahiru Thirimanne lbw, via review.

With the Black Caps seamers getting some swing and seam movement, Sri Lanka rode their luck early on, as outside edges flew through gully, while Dimuth Karunaratne inside edged the ball onto his stumps, only for fielders to watch on in bemusement as the bails didn't move.

The resulting 42-run partnership proved to be a false dawn, as Henry removed Kusal Perera and Kusal Mendis with back-to-back deliveries, sparking a collapse from 46-1 to 60-6 as all the Black Caps bowlers chipped in.

Lockie Ferguson looked at his dangerous best, mixing rapid pace and astute angles to trap Dhananjaya De Silva lbw and have Jeevan Mendis caught in the gully, while his contrasting partner in crime also had success, as Colin de Grandhomme found the conditions to his liking to wobble one into the edge of Angelo Mathews.

It was a near-perfect template of how the Black Caps want their bowling unit to operate during the tournament, and they did it without much of a contribution from Trent Boult, who claimed a solitary late wicket. With Ferguson's short-pitched offerings causing problems, and Jimmy Neesham and Mitchell Santner also taking wickets, every bowler earned a scalp in a display that bodes well for the games ahead.

A flurry from Thisara Perera (27 from 23) briefly sparked flashbacks, but there were no problems wrapping up the tail, as Karunaratne was left stranded on 52 – the 12th player to carry his bat in an ODI, and just the second in World Cup history.

His opening efforts were well eclipsed by Guptill and Munro however, who first produced their first 50 stand in their last 13 innings, before going on to coast through to 137 without loss.

They rode their luck – Munro looked uncomfortable early, and some edges flew past fielders, but when aggression is required, such are the risks which need to be taken, and today, they ended in rewards.

Munro struck just his second 50 in his last 18 innings - surely a significant boost to his confidence - while Guptill will benefit from runs under the belt as well, finishing unbeaten on 73 from 51 balls as New Zealand built a strong early position on Net Run Rate, sitting in second on the World Cup ladder, narrowly behind the West Indies.

Much tougher tasks await, but if New Zealand were flying under the radar before the tournament, you can be assured they won't be any more.