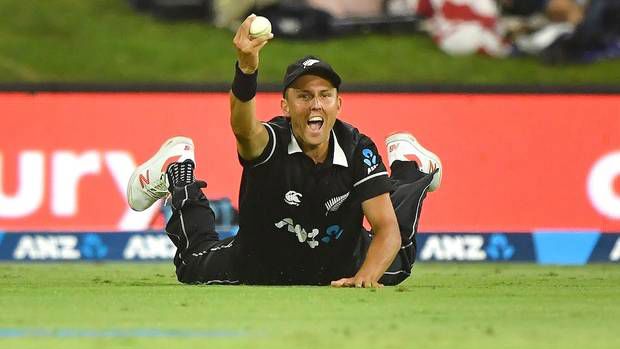 The Black Caps keep on winning, but an extraordinary innings from Thisara Perera made their latest triumph so much closer than it had any right to be.

After capping off 2018 with a fourth consecutive test series victory, the Black Caps have started their road to the one-day World Cup with another short-form series win, taking an unassailable 2-0 lead in their three-match ODI series against Sri Lanka.

A 21-run victory may look routine enough, but good lord, did they have to sweat.

At 128-7 in their chase of 320, Sri Lanka looked dead and buried, but Perera had other ideas. As meteorites lit up the sky above Bay Oval, you would have been excused for mistaking them for Perera's 13 sixes taking flight, as the all-rounder blasted an absurd 140 from 74 balls. That included four sixes in five balls from the bowling of Tim Southee, to remarkably get the visitors within 22 runs with 23 balls, and one wicket, remaining.

Then, Perera hurt his back – undoubtedly from carrying the entire team on it – and he couldn't finish the job, holing a Matt Henry delivery to Trent Boult, who took a fine diving catch running in from long on to seal a shaky victory.

The Black Caps were very nearly guilty of letting Sri Lanka off the hook – with five dropped catches from a usually sure-handed fielding side. Fortunately for the hosts, there were less problems with their batting, with Colin Munro, Ross Taylor and Jimmy Neesham contributing to a first innings total that they eventually needed every part of.

Black Caps coach Gary Stead had said that the summer's one-day clashes doubled as a trial period for the World Cup, and Munro picked a good time to make his case, crushing 87 off 77 balls.

While Munro's role has more nuance to it than simply weight of runs, he had been suffering through a lean patch at the top of the one-day order, having not reached 50 in 11 innings, and averaging just 21.8 since 2017.

He wasn't perfect – Dinesh Chandimal made a meal of an easy catch on 60 – but Munro never will be with his uber-aggressive style, and he would have likely gone on to his maiden ODI century if not a horror mix-up with Taylor which saw him run out, 13 shy.

Munro wasn't the only player to improve his World Cup claims, with Neesham rapidly making a case to be on the plane to the United Kingdom. Colin de Grandhomme might come to resent being rested by the selectors, with Neesham playing the all-rounders role to perfection - after smacking 47 off 13 balls in the opener, the 28-year-old gave Sri Lanka a second dose today, smiting five fours and three sixes in a brutal 64 from 37 balls.

While Stead will surely be pleased to see challengers putting their hands up for selection, he'll be just as excited by the continuing form of Taylor, who anchored the innings with a well-timed 90.

With Martin Guptill caught behind for 13 off the much-improved Lasith Malinga (2-45), and Kane Williamson brilliantly caught on the fine leg boundary for a solitary single, Taylor needed to fire when he came to the crease at 39-2, and did just that.

He was remarkably unflustered in seeing off the again-ineffective Sri Lankan spinners, and much like Munro, was only denied a century due to some poor running between the wickets.

By then though, he had done enough damage, and it was left to the Black Caps bowlers to lock up another series victory.

Southee removed the threat of Niroshan Dickwella for nine, and Matt Henry ensured that Thursday's centurion, Kusal Perera, had no room to move, being caught at third man for a shocking four off 23 balls.

Danushka Gunathilaka was the danger man, slaying 71 from 73 balls as Sri Lanka stayed in the fight, but Neesham drew a loose stroke to claim his wicket, and Ish Sodhi then caused a middle order meltdown, reducing the visitors from 112-2 to 128-7 with a devastating array of googlies and wrong-uns.

It looked over, until Perera went berserk. His innings deserved a decider, but instead, the Black Caps clinched yet another trophy for their overflowing cabinet.