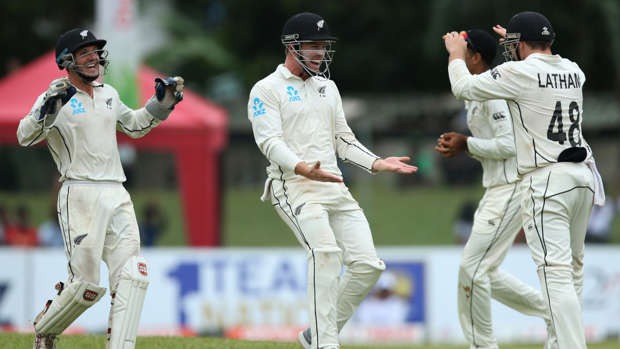 They absorbed all of the wind, rain and darkness that Colombo threw at them throughout four days of test cricket, and on the final day, it was the Black Caps who produced the perfect storm.

With constant weather interruptions making a draw the most likely result for the majority of the test, the Black Caps bowlers turned the tables on day five, ripping apart Sri Lanka for 122, and claiming a superb victory by an innings and 65 runs. It's a win that sees the two-test series tied 1-1, and moves New Zealand to 60 points in the World Test Championship – tied at the top of the ladder.

Their victory wasn't without drama though, taking the final wickets in the last session, just before darkness started to set in. The most crucial scalp was that of Niroshan Dickwella, with the Sri Lankan keeper having fought - with a bruised finger - for 161 balls before top edging an attempted sweep off Ajaz Patel. Tom Latham – anticipating the shot and running to his left from short leg – took a superb catch, and from there, Trent Boult wrapped it up.

No 10 Lasith Embuldeniya couldn't get his gloves out of the way of a short ball, Kane Williamson took the catch in the gully, and the Black Caps had pulled off a victory that looked most improbable at the start of the day.

How did it happen? Well, they had a plan, and executed it superbly - starting with a bold decision to continue their innings after a 30-minute delay due to overnight rain. Needing to score quick runs, Colin de Grandhomme departed to the day's second ball, but BJ Watling and Tim Southee completed their task with aplomb.

Watling was aggressive as he reached his seventh test hundred, while Southee was in his element, moving to 15th on the all-time test sixes list by smacking back-to-back maximums as New Zealand declared with a 187-run lead.

They had added 49 runs in just five overs, and the five overs that were to follow looked even more pivotal.

Playing truly idiotic cricket, Sri Lanka's makeshift opening pairing of Lahiru Thirimanne and Kusal Perera both found themselves back in the pavilion without getting off the mark.
Thirimanne — trying to save a test in which Sri Lanka had no hope of winning — decided a risky quick single was the best way to do it. Patel was lurking at mid-wicket, and with a one-handed swift pick-up, he knocked off the bails with an underarm shy, leaving the opener miles short.

Perera, a fill-in at the top of the order due to Dimuth Karunaratne's quad injury, had been playing wild shots all series, and sure enough, flew the bat at a wide delivery from Boult and was caught behind.

That brought Kusal Mendis and Angelo Mathews to the crease; the pairing who denied the Black Caps victory in Wellington last year, batting for longer than an entire day.

This time, their resistance lasted just nine overs. A de Grandhomme outswinger saw the end of Mathews, lured into offering his bat and watching the edge go to slip, while Mendis got a peach of a delivery from Will Somerville, drifting, spinning and shooting between bat and pad to smash into the stumps.

In between, the hero of the first innings, Dhananjaya de Silva, was caught at second slip off Patel, leaving Sri Lanka limping at 33-5 at lunch. However, the hobbled pairing of Karunaratne and Dickwella showed impressive resistance, batting for 22 overs before Southee trapped Karunaratne lbw for his 250th test wicket.

Dilruwan Perera followed shortly after — Southee's 251st scalp — but Dickwella and Suranga Lakmal frustrated the Black Caps, holding out for 18 overs as the Colombo skies threatened to have the final say.

Just in time, Somerville removed Lakmal, before Patel, Latham, Boult and Williamson combined to make sure that as the skies darkened, the Black Caps' mood was as bright as could be.