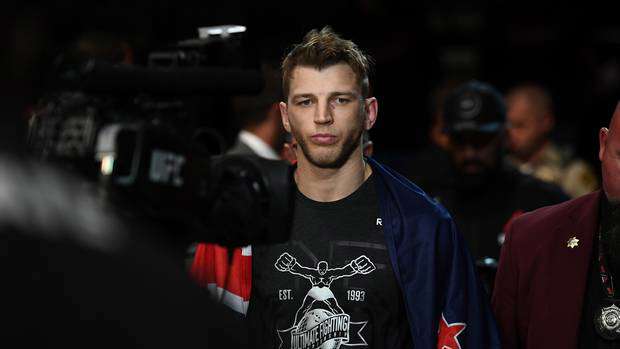 After knocking out James Vick in the first round of their bout in Texas in July, Kiwi UFC star Dan Hooker demanded to be booked for UFC 243 in Melbourne.

The Herald can confirm 'the Hangman' will meet former title contender 'Raging' Al Iaquinta at Melbourne's Marvel Stadium on October 6 (NZ time), with the fight agreement being signed this week.

"I was going to be there anyway, that's essentially why I asked to be on the card," Hooker said. "I may as well have a fight and get paid while I'm there."

Hooker (18-8) had targeted a spot on the Melbourne card since it was announced, with the timing of his bout against Vick working well with the October event.

Having been forced out of action for the first half of the year due to a concussion suffered in his knockout loss against then-No 6 ranked Edson Barboza, Hooker was hoping to remain active through the second half of the year.

Getting through the fight against Vick unscathed, Hooker called out Iaquinta after renowned MMA pundit John Morgan mentioned the American was one of the only ranked fighters without a bout, and it was enough to catch the attention of the current No 6 ranked lightweight.

It will be a bounce back fight for the 32-year-old Iaquinta, who will head to Melbourne on the back of a decision loss to Donald 'Cowboy' Cerrone in May.

"In terms of his fighting, he's a tough guy," Hooker said of Iaquinta.

"I wasn't expecting to get someone that highly ranked but, hey, that's exciting. It's a big show, a big opportunity. I guess if you knock people out you get what you want."

Hooker admitted he was expecting to be matched up with Alexander Hernandez after he beat Francisco Trinaldo in Texas, but Hernandez's lacklustre performance took a lot of the shine off the appeal of that match up.

"That's how I thought it would play out, but I kind of watched his fight, I was watching on the TV because that was the fight before me, and pretty much nothing happened.

"That was his hometown, and to bore his crowd to sleep is an incredible achievement."

Hooker joined City Kickboxing teammate Israel Adesanya and fellow Kiwi Luke Jumeau on the card, which will also feature a stack of Australian talent. Adesanya will fight in the main event against Kiwi-born Robert Whittaker for the undisputed middleweight championship, while welterweight Jumeau makes his return from a long injury lay off against Brazilian Dheigo Lima.

It's shaping up to be the largest combat sports event in Australasian history, with tickets already being snapped up at a high rate. UFC is advising fans to get their tickets sooner rather than later with a bumper crowd expected.

"It's going to be an enormous card," Hooker said. "It's a stadium show and hopefully we'll get the biggest crowd in UFC history. So to be a part of history, it will be incredible."