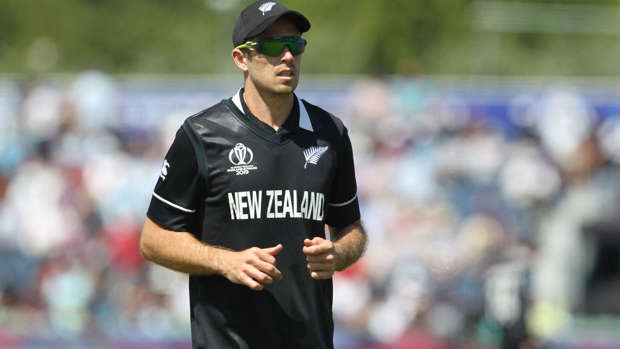 If the Black Caps are to win the Cricket World Cup, they will need to produce one hell of a transformation.

Another below-par batting performance has seen New Zealand crash to a 119-run defeat to England at Chester-le-Street, their third consecutive Cup loss.

The same ingredients were there with the bat – a dismal start, an unlucky dismissal, and some poor decision-making – all leaving a sour taste as the Black Caps look set to go into the semifinals on the back of a deflating run of results.

Yes, they will still make the semifinals – Pakistan would need to beat Bangladesh by a historically absurd margin (over 300 runs) to overturn their net run rate deficit – but with New Zealand having not even come close to beating any of the other three semifinalists, their hopes of progressing any further look bleak.

It was a familiar script against the World Cup hosts - with the bowlers giving New Zealand a chance, but the batsmen failing to capitalise.

It took a remarkable fightback to even give them a chance. For the first time this tournament, the New Zealand bowlers were taken apart by an opening combination, as Jason Roy and Jonny Bairstow blasted a 123-run opening stand.

Missing Lockie Ferguson - rested as a precaution with a tight hamstring – the Black Caps rotated through four bowlers in their first seven overs as English unleashed a rambunctious start. The pair both brought up 50s in quick time, as England reached 100-0 in the 15th over. In his first ODI since February, Tim Southee was leaking runs, and while the impressive Jimmy Neesham removed Roy, England rolled through to 194-1 with 20 overs to go.

A mammoth chase looked on the cards, but – as they have all tournament – the Black Caps bowlers produced a spell of dominance. Trent Boult removed Joe Root with a legside bouncer, and while Bairstow reached his century, Matt Henry removed him six runs later.

Jos Buttler, Eoin Morgan and Ben Stokes still loomed as an incredibly dangerous middle order, yet, somehow, with a perfect platform to fire, New Zealand shut them down.

Varying their pace and tying down the English batsmen on a wicket that had slowed slightly, the Black Caps struck back – taking 6-78 in 16 overs. Stokes struggled, making just 11 from 27 balls before picking out long-on, Buttler and Chris Woakes could only guide strokes to Kane Williamson at mid-off, and Morgan's 42 from 40 was ended by a smart catch from Mitchell Santner at short extra cover.

A chase of 350 looked inevitable for a long time, but in the end, it took some late hitting for England to even reach 300, finishing on 305-8. Leading the fightback were the excellent pairing of Henry (2-54) and Neesham (2-41), while Boult claimed 2-56, but once again the Black Caps batsmen couldn't make the most of the opportunity provided by their bowlers.

Henry Nicholls produced the fourth first-ball duck by a Black Caps opener this World Cup - incorrectly given out lbw to Woakes and failing to review the decision – while Martin Guptill was strangled down the legside by a stunning one-handed diving effort from Buttler.

Surprise, surprise, that left Williamson and Ross Taylor having to lead yet another resurrection, but just as they started to look ominous, a horrendously unlucky dismissal ended their resistance.

Settling into his innings on 27, Williamson was at the non-striker's end when Taylor punched a drive back to bowler Mark Wood. Wood got the slightest of fingertips onto it, deflecting the ball onto the stumps, and catching Williamson short of his ground.

It was the cruelest of run outs, but Taylor went from an unlucky onlooker to a guilty party just nine balls later, when he went for a ludicrous second run, and was caught well short after a good throw from backward square leg from Adil Rashid.

At 69-4, any realistic hopes of victory were vanquished, but the Black Caps at least had a positive note to show from their batting innings in Tom Latham's 57, with the wicketkeeper breaking his World Cup duck with a smooth, well-composed innings.

That, alas, was the only highlight. Nobody else passed 30, eventually limping – perhaps with their net run rate in mind – to 186 all out in 45 overs.

It's a result that ends England's 36-year World Cup drought against the Black Caps, and keeps their Cup hopes alive, securing third spot on the ladder going into the semifinals.

The Black Caps are still alive too, but someone prepare the paddles, because their Cup campaign is in dire need of resuscitation.