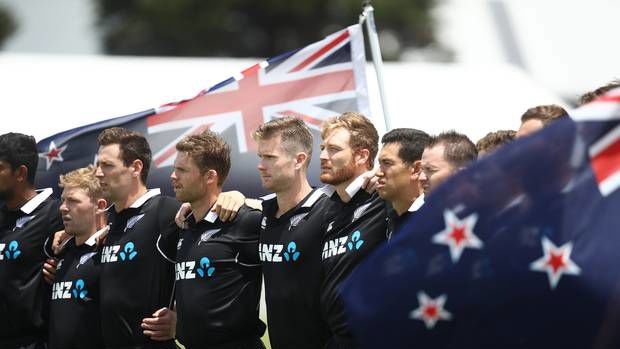 Over the years, the Black Caps have donned some stunning, colourful ODI kits. However, the bold white-collared look of their new strip has piqued the interest of local fans.

The Black Caps debuted their new kit - a black shirt with a thick white collar - in a 45-run win over Sri Lanka at Mt Maunganui's Bay Oval last night.

In past years, the Black Caps have worn an array of colours including teal, grey and beige. However, the new design had many fans likening it to that of the national rugby team, who's current jersey is also black with a white collar.

And while the similarities were too obvious to miss, New Zealand Cricket said the design was about celebrating the country.

"The latest Black Caps One Day International kit is a celebration of our traditional national colours and symbols," an NZC spokesperson said.

"Our cricketers will wear these with pride on the world stage and look to embody everything that the black and white colours stand for in New Zealand sport."

The Black Caps put on a dazzling performance in their first outing in the new strip, posting a massive 371-7 with the bat before dismissing Sri Lanka for 326.

Two returning players grabbed the headlines for the Black Caps, with opener Martin Guptill scored 138, and allrounder Jimmy Neesham posting 47 which included a 34-run over before snaring three wickets with the ball.

The win gave the New Zealand side a 1-0 lead in the three-match series. The next game is set to be played tomorrow, again at the Bay Oval.