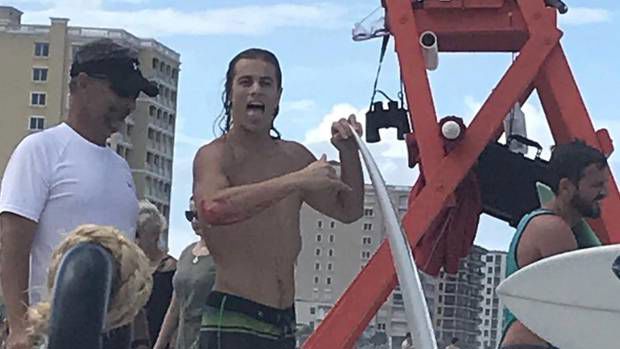 A professional surfer who was bitten by a shark off a beach in Florida ignored calls to go to hospital, instead deciding to go to the pub.

Frank O'Rourke, 23, was bloodied and bruised after being bitten on the right elbow by a shark as he surfed off Jacksonville Beach, the New York Post reported.

"Shark comes out of the water and grabs on to my arm, right by my elbow. Kinda tugs a little bit and thrashes," he told ABC News.

His friend RJ Berger described the horror of the attack, saying O'Rourke appeared to be struggling as he was attacked by what they think to be a spinner or blacktip shark, measuring more than a metre long.

"It was kind of panic, like, 'Did that just happen?'" Berger said. "It kind of took him a couple seconds to gather himself and realise, like, 'Wow, I just got bit by a shark.' And then we all went into the beach."

But instead of going to hospital, he stunned friends by walking into the pub to sink a beer and bask in the glory of his daring escape.

"He immediately went to a bar 'cause he was like, 'I got bit by a shark,' and people were like, 'I'll buy you drinks!' So he went and hung out at the pier," Berger said.