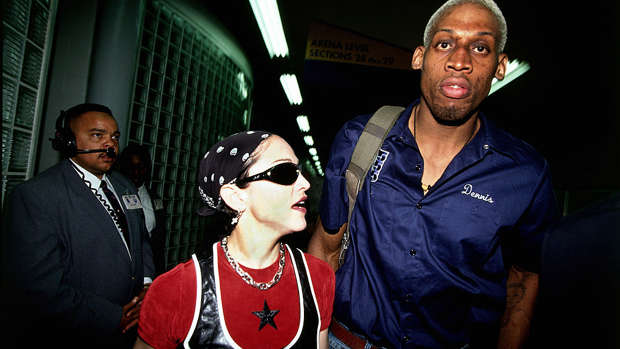 Dennis Rodman has claimed Madonna offered him $20 million to get her pregnant.

Dennis Rodman dated the 'Material Girl' hitmaker in the early 1990s and he alleged she was so desperate to be a mother, she offered him a huge payment in return for fathering a child.

The 58-year-old star even recalled a night he put a gambling session in Las Vegas on hold to fly back to New York after Madonna  - who is now mother to Lourdes, 22, Rocco, 18, David, 13, Mercy, also 13, and six-year-old twins Estere and Stelle - called to say she was "ovulating".

Speaking on 'The Breakfast Club', he said: "I was holding the dice in Vegas and she was in New York... she called so I said, 'Hold the dice.

"She sent a plane for me, I went there, did my thing, went back on the plane, they held the table for me, started playing dice again."

Dennis also insisted he was responsible for boosting Madonna's career, rather than him becoming a household name because of their romance.

Asked if he feels Madonna was responsible for his fame, he said: "No, it's the other way round, In 1993 her career was declining, she said she dated me cos I was a bad boy. I was going up and she was pretty much levelling off."

Dennis also hinted the 'Vogue' singer could have made the same big-money offer to Lourdes father, Carlos Leon.

Asked if he knew if she'd made the offer to anyone else, he said: "Well she did right? She dated her dancer."