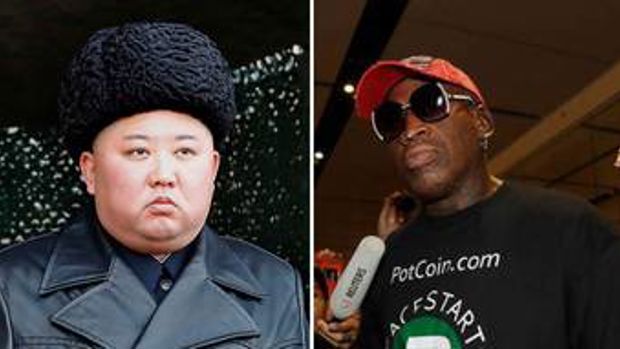 NBA great Dennis Rodman has opened up on his relationship with North Korean dictator Kim Jong-un which included wild drinking and karaoke session.

Rodman, rated as one of the greatest rebounders in basketball, has visited Kim Jong-un in North Korea five times since first being invited in 2013 as part of the Harlem Globetrotters basketball tour.

Kim Jong-un, whose poor health and even possible demise was speculated last month, is a noted basketball fan.

In an interview on Mike Tyson's HotBoxin podcast, Rodman opened up about the wild times he had in North Korea after first meeting Kim Jong-un seven years ago.

"[He said] Let's have dinner tonight. A little karaoke and have some vodka, some hotties and stuff like that," Rodman said the leader told him.

"Next thing I know, we are having dinner and we are drunk as s***. He starts singing karaoke and I have no clue what the f*** he's talking about."

Rodman added that the North Korean dictator then introduced an 18-piece band of "hot" women - who proceeded to only play the theme song from the 1978 TV-show Dallas.

It's not the first time Rodman has revealed details of his North Korean excursions. Rodman told Stephen Colbert three years ago that they don't talk politics.

"When I went over there, the first thing he said to me was, 'Mr. Rodman, we just want to know, can we trust you?' I said, 'Absolutely.' And that's how our conversation started," Rodman said as a guest on the Late Show with Stephen Colbert in 2017.

"I don't really judge people, you know, by their colour. I don't judge where they come from. I just judge people where, you know, we're all human beings. You know, throughout the day, we're all human beings. It's funny though that I don't see how people can sit there and say that this person is a 'madman.' He probably is, but I didn't see that. But he probably is," Rodman added.

Rodman explained to Piers Morgan in 2017 some of the more normal elements of friendship that he and Kim have shared.

"For me to go over there and see him as much as I have, I basically hang out with him all the time, we laugh, we sing karaoke, we do a lot of cool things together.

"We ride horses, we hang out, we go skiing, we hardly ever talk politics and that's the good thing about that."

He added: "Every time I see him he's always calm, he's always smiling especially when he's around family," he told Morgan.