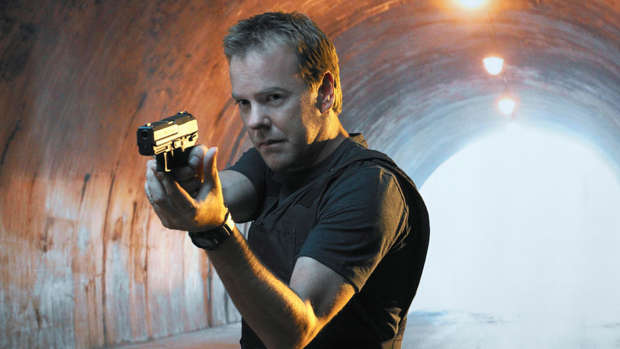 Jack could be coming back!

The 54-year-old actor portrayed counter-terrorism agent Jack Bauer in nine seasons - which ran from 2001 to 2010 and returned for a limited series in 2014 - and is keen to reprise the role again, and doesn't care whether that would be for a new TV show or in a movie, so long as there is a "great story" at the heart of it.

He said: "I've been banging my head against a brick wall for a movie for so long that I've got a concussion.

While the show was a "gift" to Kiefer, he is wary of tarnishing its legacy by continuing with the role.

He added to Forbes magazine: "As an actor, 24 remains one of the most dynamic experiences I've ever had. Where a character was allowed to have such highs and lows in such a fast period of time is a gift.

"There are very few setups that will allow you to do that, and I find that incredibly fun, challenging, and exciting.

"There's been nine seasons, and I think it rests in a credible place. The difficulty is you don't ever want to do anything that is going to damage that."

'The Fugitive' actor believes '24' is responsible for the revolution of the TV industry and the increased demand for high-quality dramas that audiences like to binge watch.

"Why I think television has changed is because they stopped writing an episodic version of an idea.

"Instead, they started focusing on serialised shows that that would have a sensibility and an entire story. '24' was a continuous, very long 216-hour movie."