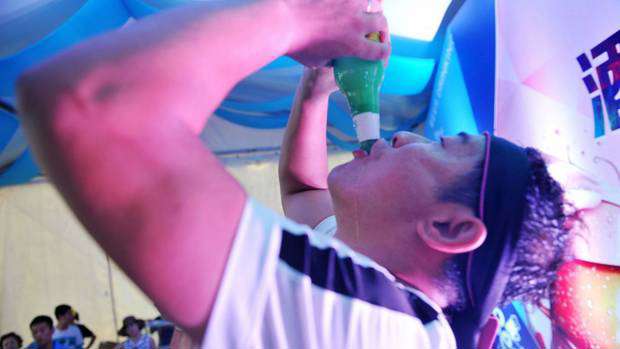 Ten beers in, a Chinese man fell into a deep sleep - and woke to a world of pain.

The 40-year-old from Shaoxing didn't relieve himself once during his binge and when doctors examined him they found the pressure had burst his bladder, tearing three holes.

When the man, identified as Mr Hu awoke from his drinking session he was hungover and suffering severe abdominal pain.

He was rushed to hospital, doubled over in pain, and scans revealed the horrifying cause.

Doctors revealed that, gruesomely, one of the bladder tears had been large enough that the man's intestines had entered the organ.

Medics were able to repair his bladder and save his life and Mr Hu was later discharged following a full recovery.

The hospital that treated the case say it isn't unique and they see an average of one person a year who suffers a burst bladder because of urine retention.

The bladder, made of muscular and elastic tissue, can increase in size as more fluids are consumed but the capacity is ultimately limited to between 350-500ml, according to the medics.

Most people urinate between four and 10 times a day.

Humans aren't born with the ability to control the bladder, but we can learn (toilet training).

However, alcohol intoxication may suppress the messages from the bladder to the brain that tell a person that they need to urinate, risking the development of scar tissue or, in extreme cases, a rupture like the one suffered by the unfortunate Mr Hu.