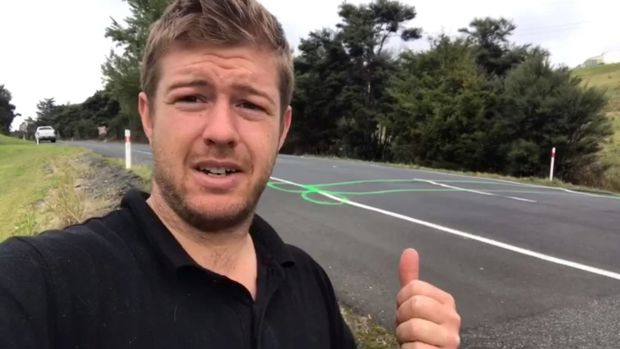 An Auckland road campaigner with a peculiar artistic bent has received his punishment for spray painting penises on public roads, but has hinted his antics may not yet be over.

Geoff Upson shared the police response online, revealing that he has been given a formal warning by police for his stunts.

The letter from NZ Police states that Upson was found to be the offender in a "wilful damage type incident which occurred between 2018 and 2021" and had "offered admissions" to police.

Upson was warned that wilful damage is punishable by three months imprisonment and a fine not exceeding $2000.

He was also warned that "the offence of harassment is punishable by two years imprisonment".

Upson has been told that police would seek prosecution if he was involved in similar offending in the future.

"Two years in jail for 'harassment' seems a bit of a stretch for marking out unsafe potholes," Upson wrote on social media.

"But on the bright side the case is closed for now. Let's hope the road controlling authorities can meet their basic obligation to maintain a safe and appropriate road surface and catch up on the overdue road repairs this summer sealing period. "

Asked by the Herald if the warning spelled the end of his phallic crusade, Upson responded: "Is it the end of dangerous potholes not being fixed?"

Upson has repeatedly hit the headlines with his attention-grabbing stunts, highlighting what he says is substandard maintenance on Auckland roads.

Upson received a call from police this year because a member of the public had complained about drawings of penises on Old North Rd near Kumeu.

Upson has previously told the Herald he drew his first penises around potholes near his home on Kahikatea Flat Rd, near Waitoki, in 2018 after complaining to AT 20 times over the state of a road and continuously being ignored.

Since then Upson estimated he had done about 100 drawings - some of them penises.

He told the Herald that, in his view, the council only had one job and that was to make sure the roads were safe and that they were not doing that

"If they come out and fix the road then 100 per cent of my drawing will be removed."