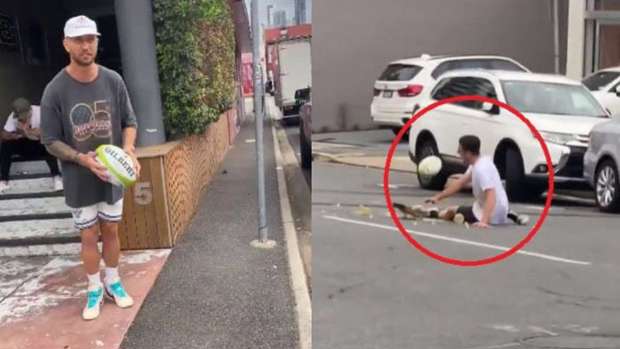 The Kiwi-born Wallaby posted a video to his Instagram drilling a rugby ball at someone "wearing a new shirt" holding a tray of coffees across the street.

The ball hits target, coffee spills everywhere and Cooper is left running away in hysterics.

Even the likes of All Black Beauden Barrett and Black Ferns Sevens star Niall Williams shared a laugh in the comment section.

Cooper later reposted the video with the caption: "I actually feel bad".

After closer examination, however, it appeared the stunt was staged, with eagle-eyed fans noticing a blue car in the background suddenly disappearing in between shots.

"How many takes did that take? The blue car parked up suddenly disappears," one fan wrote.

"What I like best about this, Quade is the magic trick you pulled with the blue car," wrote another.

Cooper is yet to respond over being caught-out, but it's unlikely he'll complain in light of the sky-rocketing online fame he's received.

The club is coached by former Reds' head coach Nick Stiles in the Challenge League.