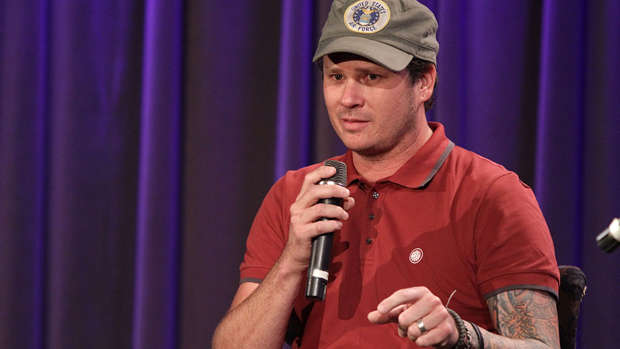 The truth is out there and it turns out that former Blink-182 guitaristand now current alien hunter Tom DeLonge has had it all along.

The US Navy has confirmed that videos of UFOs made public by DeLonge are, in fact, videos of real UFOs, reports Vice.

DeLonge has been tracking UFOs and aliens for a long time. He co-founded To the Stars Academy of Arts & Science, an organisation that works with the US government to "change the world" by bringing together science, aerospace and entertainment.

This is the first time the Navy has addressed the content of the videos. A writer for Swedish magazine UFO-Aktuellt said the Navy's language was notable.

"That the Navy is using the term 'Unidentified Aerial Phenomena' shows that they have broadened what is expected to be reported by U.S. fighter pilots to investigate anything unknown in their airspace that in the past has been connected with a stigma. If these investigations are due to an interest in finding the cause of the UFO phenomenon—in a ufology sense—or due to reducing flight hazards or to counter unidentified intrusions by known adversaries, and readiness for technological surprise, remains to be seen."

Navy pilots shot the footage of the "unknown" objects in the three videos from their aircrafts. They were first reported on in 2017 and 2018.

The first was shot near the coast of San Diego in 2004, filmed on a camera mounted on their F-18's gun. The second and third videos were shot in 2015 showing the unidentified craft rotating in the sky while the pilots express confusion and, in the third video, flying extremely quickly over the water's surface.

The Navy's choice of words when confirming the videos as being of real UFOs also raised eyebrows within the alien tracking community.

"I very much expected that when the US military addressed the videos, they would coincide with language we see on official documents that have now been released, and they would label them as 'drones' or 'balloons,'" said John Greenwald who curates the largest civilian archive declassified government document at The Black Vault. "However, they did not. They went on the record stating the 'phenomena' depicted in those videos, is 'unidentified.' That really made me surprised, intrigued, excited and motivated to push harder for the truth."