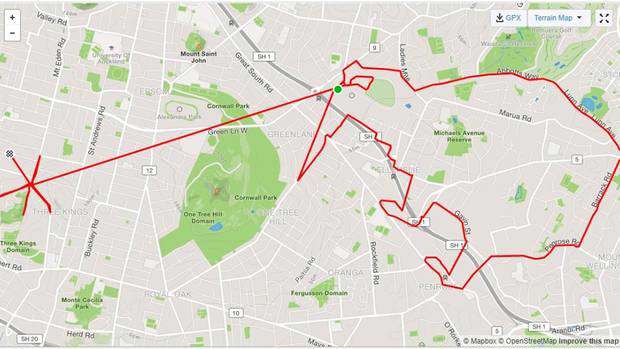 A man's bike ride on his birthday wouldn't usually make headlines - except this is a pretty special one.

Auckland man Carl Wells cycled 28km last Sunday for his birthday and his epic ride has now gone viral because of its creative route.

Tracking his ride via GPS, he created a portrait of the famous Laser Kiwi, to this day the most popular design of the flag referendum of 2015.

The piece of "Strava-art" quickly went viral on social media, where Wells has been praised for the creative way he chose to spend his birthday.

It's not the first time he celebrated this way - but this year, he wanted to use his creativity to help a good cause.

"The past two years I've gotten a few mates together on my birthday to create Strava-art just for a bit of fun," he told the Herald.

"This year I wanted to do something bigger and use the ride to help fight climate change."

Wells says he kept the design top secret and advertised the ride publicly through Strava, a social network for cyclists. "An eclectic group of 22 cyclists turned up at the assigned meeting point and followed me on a 30-kilometre ride, having no idea where we were headed," he says.

To make a perfect Laser Kiwi, the group had to cross the motorway eight times, ride part of the Ellerslie racetrack and even scramble up through some bush.

The Laser Kiwi design was only revealed at the end of the ride on each cyclist's GPS computer.

It took the group nearly two hours to cycle the 28km route.

The Laser Kiwi ride has raised $667 to Cool Earth so far.