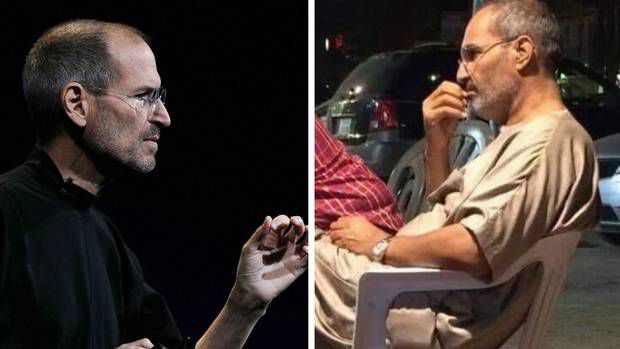 A photo of a man having a coffee at an outdoor cafe in Cairo has gone viral after conspiracy theorists claimed it shows the late Apple founder Steve Jobs alive and well, 8 years after his death from cancer.

The undated photo first surfaced on Facebook before it was shared to Reddit, where users had a field day with the intriguing image.

Despite the lack of an Apple watch, or his trademark turtleneck, many saw a striking resemblance. "This guy looks too much like Steve Jobs to be so random," said one.

Others thought his pose gave it away, saying there was "something about the way he sits".

The location of Egypt added fuel for conspiracy theorists, with one user noting it was "not far fetched" because Jobs' birth father was a Syrian Arab.

Another said: "Honestly, wouldn't put it past him. His love for Egypt and that type of simple living."

"That spirituality that lives there. The need to escape."

Some had their doubts, but thought that Jobs' maverick nature might lend weight to the theory.

"Idk [I don't known] man. I'm not very into conspiracy theories, but Jobs would be crazy enough to actually do it," wrote one.

The man also went without shoes and Jobs was well-known for going barefoot while brainstorming.

Steve Jobs died in 2011 after a battle with pancreatic cancer, which he first made public in 2004.

This isn't the first time a photo has sparked talk of the legendary entrepreneur being alive and well.

Similar theories appeared in 2014 when another photo posted to Reddit showed a man in Rio de Janeiro who bore a striking resemblance to Jobs.

The Apple founder stepped away from the company and when he returned in 1997 it was nearing bankruptcy.

In a remarkable turnaround, Apple went on to become the first company in history to gain a market value of over US$1 trillion.